Ushen are most known for their love of nature and their strong desire for individual freedom.  Most ushen prefer to live their lives unfettered by the laws and governance of any nation or state, which is why they are, for the most part, a tribal people. They are the largest of the Ten Races, often standing as high as eight or nine feet, with a hide of coarse fur, bull-like heads and feet, and elegant horns on the heads of both males and females. 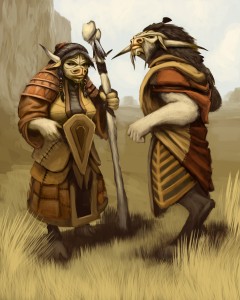 Ushen, like all of the Ten Races, are found in many parts of the Tamarran Continent.  They love the openness of the great plains — Wellinson’s Western Prairie Lands, the Eastern Farms Lands, and the Plains of Frestehal — but they also live in cities and towns throughout Tamarra.  They are not fond of dense forests and mountainous regions.   (Note: point your browser here to see a map of the Tamarran Continent.) The greatest concentration of ushen still live where their tribe originated [1]: throughout the vast grassy Plains of Lochuum in the southern part of the Continent, home to many dozens (some say hundreds) of tribes. If the need arises, the many tribes living here can unite into a massive Ushen Nation…a force to be reckoned with.

An ushen tribe may be as small as 50 -100 or as large as several thousand.  In the latter part of the third millennium, many of the largest ushen groups formed nations that were simply loose confederations of independent tribes.  In ushen culture tribes dominate: they have a remarkable ability to walk away from decisions they do not like.  Only when there is significant danger to them as a larger group can they rally together as a single large nation. One thing they will not walk away from is their land: they are very protective of the property on which they make their homes.

The ushen desire for freedom is also manifest in the number who live their lives belonging to no tribe.  These ushen call themselves nomads or explorers, although the tribal ushen are not as complimentary, often referring to them as drifters, strays, or even vagabonds.  They keep to themselves, perhaps traveling for a while with a few others of like mind or similar goals.

It was the ushen nomads who started the Great Migration in SP~2,617 [2], when many moved into the cities of the south, and, shortly after, the cities of the north.  It is still not known what precipitated this movement, but there were a number of confrontations between the nomads and the tribes shortly before the Great Migration.  Perhaps the nomads were pushed out of their homes in the Plains of Lochuum by the tribes around them, or a common enemy drove them out.

The ushen who have migrated to cities and to the northern parts of the continent have adapted well to their new surroundings, and have become strong members of society.  However, there is still a great longing among the ushen in the north for their southern “homeland.”  This desire becomes a small movement of its own every three years, when many ushen from the north take one to three months to travel back to the Plains of Lochuum to visit their brethren [3].  Although disagreements may arise, it is a time of many celebrations.

1. The ushen were one of the early races to populate the continent, appearing on the Plains of Lochuum over four millenia ago, when they quickly spread and settled.

2. A Brief Note on the Beyonder calendar:  “SP” is an abbreviation for Time of the “Sovereign Pulse”,  a term given to mark the years of the current time period, the Third Era of of the Fifth Age of the World.  The ushen first appeared a little over six centuries after the beginning of this time period.  The current date is SP~5,016.

3. Finding their way past the Undead that inhabit the middle regions of the continent is a difficult, and dangerous, task.  But, they have their ways…subject of a separate blog.