The Family of Oma

Division for the Study of Fexofamilial Communities and Geneology (DSFCG) 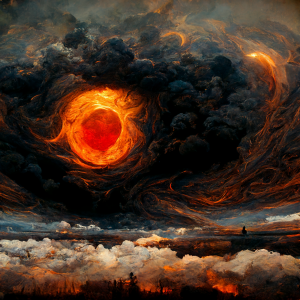 Oma Rages in the Skies above Ethem

I was approached by the head of the Guild Energetic Research Collective (GERC), my good friend Allo Bathrelmo, and his leader, the Head Administrator of Research Initiatives, Gorsal Rothless on the 38th day of the month of Harmon, in the year SP~5,022 about a project of great importance. Gorsal had initiated conversations with Allo several years ago to discuss the potential value of educating the folk of Naldrin City, and perhaps those outside of the city, about the Fekxtah that make up what astrofekxtonomists call the Local Fekxtah Group System of Order (LFGSO). In the common parlance this is referred to either as Oma’s Family (Oma being, of course, our central Fekxtah) or simply as our Solar System.

Gorsal is well-known within the Guilds as a visionary and a master communicator. She has spent much of her career investigating the history of the Tamarran Continent including its place on our own Fekxtah planet Ethem. These initiatives delved into the recent history of Tamarra during our current time period, the Third Era of the Fifth Age of the World. However, the more she explored recent events the more she was led back to earlier times. This led Gorsal to explore the history of the Tamarran Continent in the Eras of time that preceded our own. This included both the First Era known as The Time of the First Living Creatures and the Second Era, the Time of the First Races.

While investigating the Second Era, she came across writings from the great Elzheni Race, the most dominant race of this time period. They were a race of creatures not entirely unlike ourselves in stature and physical prowess. However, they did excel far beyond us in their deep knowledge of the world. No other race during that time or before, or after, was able to establish the kind of sovereignty they exerted over the world and the other living beings that populated it. Their untimely and unfortunate extinction at the break between their time, the Second Era, and our own, the Third, is still not well understood, and is a story to be told outside of these pages.

What is not as well-known about the Elzheni is that their exploration led them well beyond our own Tamarran Continent and even beyond the Fekxtah planet Ethem on which Tamarra lies. As remarkable as it may be, they recorded explorations of the Fekxtah planets that lie beyond Ethem. The reason this is not common knowledge is twofold. First, there are few writings or artifacts that remain of the time of the Elzheni. In fact, what few writings we now have only became known to us recently. These ancient writings were found in one of the oldest, and largest, of the heola mayamar*. Prior to the discovery of these artifacts, we had only rumors and unreliable tales that were more legend than history, and so we are deeply indebted to the heola who aided our studies.

The second reason why these ancient Elzheni artifacts are not well known is because there is great skepticism among many members of the Guild who believe that the writings are not genuine and, even if they are, that they are fiction and not true science. Many of our most prominent Guild scholars believe that what is presented in these writings is, simply put, not possible. To be clear, the skeptics do not doubt that there are worlds outside of our own Ethem. This is a fact which has been made clear in the Guild literature and in the Guilds’ many studies of Ethem’s sky. What is contested are the detailed observations of these other worlds that could only come about from direct observation. In other words, the Elzheni would had to have been standing on these other worlds to observe the facts they report. Most Guild scientists consider this to be sheer fiction since they believe it is a feat well beyond even the mighty Elzheni. Those members of the Guilds who do believe the accounts to be true have so far provided no credible evidence or theories about how it could be accomplished.

Thus, the debate has raged for a number of years now with no clear outcome in sight. Since Gorsal Rothless and Allo Bathrelmo chose me for this task, it is my responsibility to choose how best to execute it. I have made a decision to include key extracts from these ancient Elzheni texts. I believe that it is vital for a complete understanding of this subject that it be included, and I have, with these words, I have discharged my duty to inform the reader of the circumstances surrounding the documents so they may make up their own mind as to its veracity.

In conclusion, I consider this document to be a primer for any who might be interested. It will contain much of the basic information that we have, to this point, gleaned from the documents that the heola have provided us, and that are now held in the archives of the Division for the Study of Fexofamilial Communities and Genealogy (DSFCG), a division within the Guild Energetic Resource Coalition (GERC), the division of the Guild in which I work.

To fulfill my responsibility to make this document short and approachable, I have included only the core elements from our understanding of this topic. This should be sufficient to give a discerning reader an understanding of our Solar System and ready them for a deeper study of this topic should their curiosity lead them to it.

I submit my work on this the 9th day of the month of Kalkix of the year SP~5,022, and dedicate it to the dogged determination of Gorsal Rothless to see it become a reality.

*  A mayamar is a heolas library, though, since it is of heolas origin, there is little if any organizational structure to it. There many heola mayamar, and only a small number of them are known to the general population of the Tamarran Continent. However, it is known that they contain rare books and writings of many kinds which include texts from the Second Era of the world.