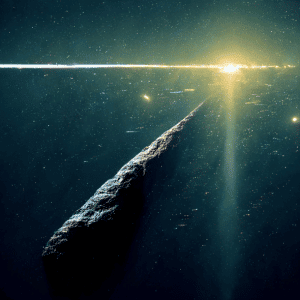 Been has an elongated shape which tapers toward one end. It is far longer than it is wide, at its widest, and is made up of a large variety of rocks, metals, and ice. This planet, if we can call it that, is over ten thousand miles long and is the closest of all the planets to the Fekxtah sun, Oma.

On its surface is a thick layer of charred rock. Obviously, this comes from being so close to Oma, where it is being constantly barraged by Stretchers and the occasional Fire Daemon. Been also spins quite rapidly both end-on-end as well as spinning around its longitudinal axis. The result of the spinning is that the skies as seen from Been are in constant motion; often a dizzying motion.

Been is the home of five creatures from an ancient race of celestial beings known as the Fenninthengly, “those who make the shield against fire”. Their home is deep inside the planet, though they wander across all parts of the rocky landscape of Been.

The Fenninthengly are a race that was born at the time that the Fekxtah themselves were created. They are a race of lesser beings, often referred to as the Lower Fekxtah. Their purpose was to tend the Fekxtah, to make sure that the gardens of Fekxtah spread across the Great World survived. They repair the Fekxtah if they break and repair the damage done by one Fekxtah against another, which occurs frequently.

The five Fenninthengly that tend Been take turns maintaining shields that protect their charge from being torn apart by the severe heat and fires that emanate from Oma. Their constant vigilance keeps Been whole and prevents it from succumbing to Oma’s tremendous gravity that is constantly trying to pull it into its fiery belly.

The five Fenninthengly were also given the task to tend Been in a manner that ensured its interior would remain cold and would be continually nourished by the warm currents that surround it.  Upon occasion the Five Fenninthengly have had to fend off cast-offs from Oma, fire creatures who had tried to land on Been and make it their home. Over the ages there have been many battles. The ancient text claims that long ago there were many more Fenninthengly, numbered in the thousands, but these five are all that remain.

This station is located near the tapered end of Been, deep under its surface so that it is protected from the ravages sent by Oma. The station is quite small, and can accommodate no more than a dozen creatures at a time.

It is small because the Energy required to protect the station is profound, given it is on a Fekxtah planet so close to Oma. It is also small, as the ancient texts claim, because it must be small in order to hide from the Fenninthengly, who consider the station to be a threat to the world they protect. Typically, only one or two Elzheni would be at this station at any time, and they would usually only stay for a few hours, knowing that if they were found out by any one of the Fenninthengly, they would be immediately destroyed, or worse, cast off into the deep void of space.

Of note for this Fekxtah Station are a number of entries that describe an “invasion” by some other kind of creature. If the ancient texts are to be believed, and we have been clear about that in our introductory pages, there was a race of creatures from some place, some Fekxtah planet, other than our own Ethem.

The texts tell us that the Elzheni caretakers for Fekxtah Station #5 became suspicious of strange activity. They had sent a number of caretakers to the station over a period of many days to perform their typical duties, and none of them returned. It was, sadly, not unusual for caretakers to not return. It was believed that it was simply a matter of bad timing; they arrived at the same time as a Fenninthengly was passing by the station or inside it, and they were killed. However, it was unheard of for this to happen consistently for as long as this.

The Elzheni decided to send a contingent of warriors, each garbed in both physical and Energetic protection. One survivor returned from this mission. She told of encountering alien creatures that attacked them as soon as they arrived, and that these creatures had shields of some kind, likely of Energetic make, that protected them from the warriors’ weapons. More warriors were sent and were sent with additional protections and newly devised weapons. This conflict went on for several months before the Elzheni were at last victorious. Though this small war was captured in great detail in the ancient texts, we will not recount them here.

The lesson that was first learned during these encounters was, as the Reader will see, on other Fekxtah planets and other Fekxtah Stations, leaving the writers of the ancient texts with an unshakable belief that we are not the only Fekxtah on which creatures live and have knowledge of, and skill with, the Energies that make up the Great World.