StoryTelling: The Keeper of the Stories

It is everyone’s job (and often their distinct pleasure) to remember all of the great stories that have happened to their players over time.  However, the official record-keeping falls to you, the Moderator.  It might sound boring and bureaucratic, but it can be really nice to have a record of your adventures to look back on, especially if your campaign goes for months or years. 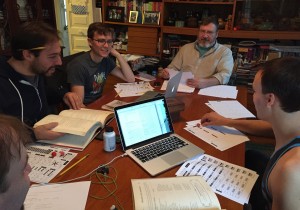 We have an online system on the “Builder” section of the FNB Games website in Beta to help you with this process, but if you want to go analogue, get a notebook that is reserved just for this task.  At every adventure write down the date, location, players and their characters, a general overview of events, any significant characters that may reappear, and anything else that is likely to have a lasting effect.  The more detail the better — but at least get down the basics.  We still have the original logs of old Beyonder adventures, and we always enjoy looking through them.

Not only is it fun to be able to look back and enjoy your various exploits, but it can come in handy.  You may arrive at a point in longer campaigns when you have gotten through all of your planned adventures.  It’s time to write some new content —  but where does the new path start?  If you look back at what has happened so far in the adventure, you will see little story hooks that came up along the way and were not fully followed through.  Was there an enemy who survived a battle and escaped and has been plotting revenge ever since?  Did your players see something off in the distance that seemed interesting, but they didn’t have time to explore it fully?  Was there an interesting NPC who can become a recurring character with their own story line?  These are all great ways to make the new plot line connect rather than come out of nowhere.

On a related note: it is also fun to have a separate place, either in another part of the same notebook or in a totally different one, to record funny things that people said or did.  Nothing gets gamers laughing more than remembering that time a player thought it would be a good idea to bring his giant pet bear along on the heist and ended up having to fly it out when the plan went south — leaving the image of a giant, winged bear silhouetted against the moon burned into the minds of the enemy.  Who knows?  Maybe that will become significant someday (wink, wink) …