The Setting of the Beyonder World

Most RPGs have a similar structure:  they’re a group of rules with a setting built around them to give them context.  Maybe the designers had a great idea for a combat system involving weapons of different sizes that took reach into account; as a result they needed to have a setting with a variety of melee weapons.  Another design team might have an idea about the movement of giant mechanical robots; their setting could include space combat. 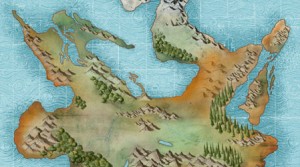 The northern plains of the Tamarran Continent

With Beyonder, we went about it a whole different way.  We started with the setting.  We created a world with a complete and coherent set of natural laws, all of which grew organically from a single idea: The Six Energies.  We spent endless hours arguing about the exact role of each of the Energies, how they interacted, how they combined to create the world of Beyonder, and how a Channel, or Energy wielder, can control the flow of the Energies to do amazing things.  From that we created the rules of the game, always asking ourselves, how does this relate to The Six?  Is this logically consistent with the rest of the cosmology? Does this support the stories of the creatures inhabiting the world?

Why am I telling you all of this?  Because understanding the setting of the Beyonder world is crucial to moderating the game. The more familiar you are with the setting, the easier it will be for you to create content in a smooth, seamless way.  So, how do you get to know the setting? 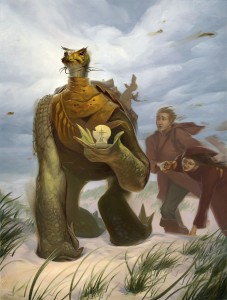 Begin by reading the books.  Almost a third of our rulebook, Beyonder: Science of the Six, describes setting, including cities and neighborhoods, guilds and organizations, and the many Races who live on Tamarra.  Particularly helpful are Chapter 2: The World, Its Workings, and Its Inhabitants; and Chapter 3: A Short History of the Tamarran Continent.  In addition, check out Imbelnhi’s Bestiary, with its spectacular illustrations, written by a naturalist character living in the world of Beyonder. Imbelnhi had a passion for the creatures he encountered while exploring the continent, and his stories range from humorous to frightening to tragic.

Our website has a page with a lot of related information on topics including the Races, the Energies, and the Continent.  Our blog entries (you’re reading one now!) provide you with more depth on some of the most important aspects of the setting.  I would particularly suggest looking into the entries on each of the Ten Races; the three best locations for starting a campaign in Tamarra; the various organizations, particularly the GERC; and any other topic that tickles your fancy.  Blogs come out twice a week, so there’s much more to come!

Finally, playing through our premade adventures can give you another perspective on the setting.  We hope to make two of these (“A Little Bit of Beyonder: Sally” and “Down”) available on our website soon. We are also in the middle of developing a multi-part campaign, “Legends of Tamarra,” that literally takes your character through a number of major historical events that shaped the world of Beyonder on the Tamarran Continent.  It is the ultimate ride, after which you will know more about this world than you do about your own.