As every writer knows, one of the key elements of any story is conflict.  There must be a conflict for the characters to resolve — otherwise there is no reason to pay attention to the action.  In the context of RPGs, this conflict is often a rumble.  People get hurt, sometimes they die, monsters are often slain or sometimes just transformed into a newt with a party hat that is then stepped on to finish the job. 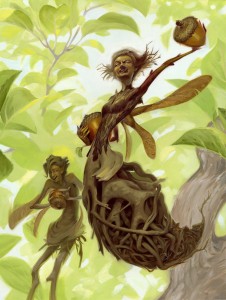 However, not every story is about bludgeoning your enemies to death.  The sophisticated gamer (and let’s face it, Beyonder players are quite sophisticated) oft grows tired of the monotony of the hack and slash style, and will search for alternatives to violence as a means of resolving conflict.  But boredom is not the only reason to avoid a fight.  It might be a tactical decision when attempting to thwart a foe whose military prowess far exceeds that of you and your companions.  Or maybe you don’t know what you’re up against: you walk into a room and see a stranger.  Do you stab it to death before saying hello?  That’s just poor manners.  Or can you take it further?  The only thing better than defeating an enemy is to make them an ally.  Fists only make fiercer foes, but a conversation has the potential to create close companions.

Beyonder players, in particular, are encouraged to explore these potential options, and not just to add variety to your encounters. The world of Beyonder allows for deeper stories:  stories that are more than two-dimensional, that mean something, that reflect what we hope to see in our world.  Our rulebook Beyonder: Science of the Six devotes Chapter 8: Additional Forms of Combat to non-physical combat related conflicts.  It focuses on two main parts: Countering Powers, and Social Conflict. 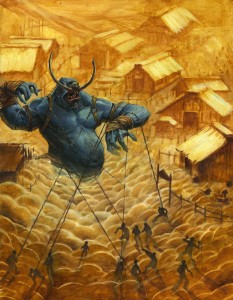 Social Combat is a great option for games of political intrigue —  but also for getting out of a fight you can’t win.  Beyonder has a system that keeps track of how well you influence someone in order to change their opinion.  If you do this well, you can win every battle without lifting a finger.  It doesn’t hurt to have a Mentarch or a Charismatic on your side either.

Using Countering Powers is a great way to resolve conflicts without combat.  In fact, it is the official method used by the Guilds for formal disagreements.  It allows opponents to tire each other out without actually hurting anyone.

Countering is as dynamic and exciting as regular combat.  It is a back-and-forth battle between two combatants, but rather than being a barbaric and bloody clash, it is more like an elegant dance where wit and strategy can win you the day.  It can also be employed in conjunction with standard combat to disable and distract an enemy Channel.  Your opponent will either be forced to postpone their action to shake off the assault, or suffer the consequences as you rapidly drain their Fatigue.  Throw into the mix that the Ethereal Energies have a particular affinity with countering which gives them access to Barrier abilities, as well as Powers that give them an extra edge, and Countering becomes an even more enticing option*.

I want to tell you a secret: when I started playing Beyonder, my goal was to win.  I wanted my character to be the most powerful warrior with the best gear and the most money.  As I grew as a person and a gamer, it became clear to me that I had the wrong idea.  At one point our moderator, Robin, created a situation in which we had more money than we could spend. We had become so powerful that most battles were either trivially easy or epically challenging, and neither was satisfying.  Social Conflict adds to the possibilities, making game play more interesting and more nuanced.

Single Argument, your character attempts to convince someone to believe a single idea or complete a single task:  “I didn’t eat your donut when you weren’t looking,” or “stop fighting and put down your weapons.”  A Complex Argument takes a while to talk through.  Maybe you need to slowly work your way through your target’s defenses (over a few months you convince the stubborn king to sign the treaty), or you have to convince them of several smaller points to achieve the larger goal (you list all of the reasons your party should take the dangerous, but faster, passage on the boat, rather than the slow but safer mountain pass).  In Opposed Arguments, you say one thing while someone else is saying the opposite.  Let’s see who does it better!** 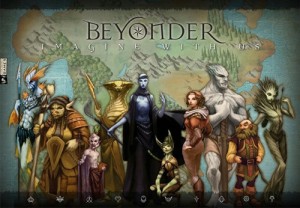 And so, my friends, we come to the end.  But as we all know, ends are only the beginning of something new.  I hope this series was helpful for readers new to moderating, as well as seasoned moderators new to Beyonder.  Moderating is not easy, but it can be so much fun.  Please let us know what you think or if you have other tips and tricks to share.  I’ve only just chipped away at the tip of this iceberg.

Now go forth and tell some epic stories!

*For more details, check out page 140 of Beyonder: Science of the Six.

**The details of the system are on page 141 of Beyonder: Science of the Six.  Take the time to look at this chapter.