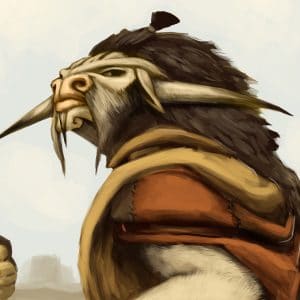 “The history of the Kings of Tarnath is long and is both good and bad. Falfosta was, generally speaking good. For a human.” — Achrovach, Ushen Teller of History.

Falfosta: The Absent King, or The King Who Watched. Born in the year SP˜2,740 and coronated SP˜2,764. Falfosta was known as one of the great rulers of Tarnath; he brought peace and prosperity to the city, kept it free from war for his reign, and was instrumental in the founding of the GERC.

Falfosta was also one of the last human kings in Tarnath. Until his rule, humans enjoyed a kind of passive privilege over other races. Humans were the primary movers in constructing multi-race cities millennia ago – sometimes building cities from the ground up, as they did with Tarnath, and sometimes simply occupying and diversifying a city built by other races (this is precisely what they did with Naldrin, which used to be almost one hundred percent dwarven). Now, this diversity was a great thing in principle, but in practice it was not instrumented terribly well. Humans brought in other races with promises of jobs according to their perceived specialties: they hired dwarves and ishiris almost exclusively as stoneworkers, ushens as gardeners, wellyns as tinkerers and repairmen.

Many of the stereotypes the humans based their hiring on were accurate to an extent; of course ishiris are creatures of stone, and of course ushens have a natural bond with the earth and its flora. But these are not the only things each race can do; to say that ishiris are only ever stonemasons is ridiculous. How would ishiris eat if they had no farmers, no cooks? How would kamaris build houses without architects and laborers? Thousands of members of the Ten Races were brought into booming cities only to be categorized exclusively by their race.

Over the centuries, by virtue of the demand for these skills, each of the Ten Races was pigeonholed into stereotypical jobs, whereas humans were free to occupy most any profession or caste.  Most notably, the realm of politics was almost exclusively theirs. This system of privilege continued for millennia, becoming more and more deeply ingrained in societal perceptions until most people thought an ishiri gardener was simply ridiculous, or an ushen magistrate was a fish out of water. Er. A… bull out of pasture? I suppose that’s more of a zweyjen phrase, come to think of it. Anyway. Hm. So the most pernicious part of this system was that most people were convinced it didn’t exist: ask someone and they would tell you, “Well, dwaheelies do have some public offices! And one of my best friends is a zweyjen carpenter!” – and the system kept on its merry way.

And then, well, Falfosta came along.

Falfosta was the first king to actively hire against these norms: he employed ushen advisors, wellyn cooks, zweyjen scholars. While he didn’t create any legal requirement to go against the norm, he subverted it through his actions. Some scholars argue – and I must admit, I did touch on this in my thesis graduating from Naldrin’s First – that Falfosta set the stage for the first non-human ruler of the city, the kamari queen Lemesta, who took the throne in SP˜2,876. Lemesta was extraordinary. She was the first… well. Yes. I can get into her later.