It was only one day’s travel, but a long one. We walked down the mountain to get to the coast, and lo and behold there was a road going along the coastline just up from the beach. I learned again not to underestimate Donnessling. That guy knows his geography.

The road hadn’t been tended in a long time, so the walking could be a bit rough at times, and there were several points where the forest had overrun it, but it was a lot better than trying to make our way through the up-and-down in the mountains. I was glad of that and so were my legs. 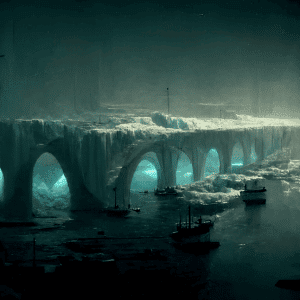 We reached the bridge about an hour before sunset. I was just shocked at the structure. It was beautiful, and, like the name says, it’s made out of ice. I don’t know how that can be done, but it looks like it can. Donnessling and his folk took no particular notice. They’d clearly been here before, so I was the only one ogling the structure. When I asked, the nossring told me that the bridge was old, very old. They said it was, “before the Third Era”. Since this is the year SP~4,909, it means that it’s five thousand years old, or probably a lot older.

I was in mid-ogle when Donnessling came over and stood next to me. I let him stand there for a minute. Yeah, it was a bit rude, but I wasn’t in the mood for what he was going to tell me, and I didn’t really care if he got a few ruffled feathers, though, it’s pretty hard to ruffle that guys feathers.

Note to Self: Picture Donnessling in my mind with a head full of feathers and a long feathery tale. I guess that’s the kind of mood I’m in right now.

He let me start for a while. I think he wasn’t going to give in to my petulance, but, to be honest, I think he knew that the bridge was a pretty damn magnificent thing to set eyes on.

After a minute he leaned down to me, but before he could say anything, I turned on him and told him that there was no way he was getting rid of me at this point and, unless he tied me to a rock, I was going to follow him and his folk. I think I said that kind of loud, because when I was done, I noticed that everybody was looking at us.

Donnessling sighed and looked away. I started to say some more, but he put up his hand. He did that pretty forcefully, like he understood my point (or he’d had enough of my point).

“I can’t slow down, Rhonda, for you, or anybody.” He stuck his finger at me on the second half to make his point, as if he needed that extra bit of flourish. “I won’t put anyone in danger looking after a human, not even you.”

I admit I was flattered when he said ‘even you’.

“If I fall behind, then leave me behind!” I wasn’t having any of it. “I know how to fight. Not like your folk, but I can fend for myself.”

When I saw him unmoved, I added, “And, I can write the story and get it published.”

Still unmoved. He was about to do something, like tie me up or the like, when it suddenly hit me.

“I know the Queen of the Isselt’s”

That got his attention.

“Yup, she’s a relative of mine.” Well, a pretty distant relative, but still family is family. “And, the Isselt’s live on the mainland near the part of Begkragks’ folk on that side of the water. And, they trade with those dwarves and know how we could get into their mountain.”

I’d made the best point I could, and it seemed to be good enough. Donnessling turned and walked away, and with his back to me he said, “If you fall behind, we’ll leave you behind!”

I call that a successful negotiation. Now I just have to figure out how I’m going to do all that stuff I said I could.