— Shellwan Wah, First Order Naturalist and Head of the Guild Department of the Natural Creatures of Tamarran Continent 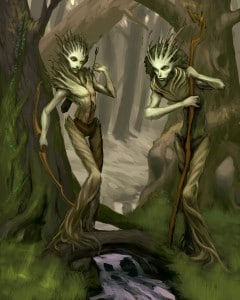 Somans have known how to change their own biological sex for at least centuries, and perhaps millennia; the first known record of a transition dates back to SP~4,590, when the crawn Soman by the name of Tasziik changed her body from that of a biological male to that of a female. This transitioning is not uncommon among the Guild; hundreds of Somans have recorded their own experiences of moving between male and female bodies (and everywhere in between). It is curious, therefore, that in some societies this still seems to carry a stigma. Ushen culture, for instance, tends to regard gender nonconformity as a perfectly normal occurrence, whether it manifests as a desire to physically transition sex or simply identifying oneself as a gender other than what they were given at birth with no desire to transition. Crawns are notoriously less accepting – which makes Tasziik’s historic change all the more impressive.

Lhavernu Sah is, to my knowledge, the only Soman on Tamarra who specializes in Energetic reassignment of gender in others – and he is one of only a dozen or so Somans who know the process of transitioning bodies other than their own.

Lhavernu, an ushen from the tribes of Lochuum, was originally trained as a medic at no less prestigious a university than Naldrin’s First. He was among the top students in his class, and worked as a healer in the city for years – until one day a patient came to him with a problem he had never faced before. This patient, a female-bodied kamari, had never felt that he had, as he put it, the “right body.” He felt he was a man despite having traditionally female anatomy.

Lhavernu thought that he could solve this problem. That he could do what no one had ever done before: change the biological and Energetic sex of someone other than himself.

The process of creating the Power to transition a stranger’s body was long and full of technical jargon. I’ll spare you the details, but suffice it to say that Lhavernu was resoundingly successful. The technique is difficult to master, but can consistently change the physical body from one sex to another over the course of mere months. And while the population of Somans who have spent the time to learn the procedure is still small, it’s growing every year.