Dwaheelies are the smallest of the Ten Races, but their physical size belies their strong interest in intellectual pursuits and their powerful mental acuity.  They tend to form their most intimate emotional bonds with others of their Race.  They are very aware of their family histories, and tend to think of all dwaheelies as family.  They are also fiercely loyal to anyone they find worthy of respect and trust; there are times when they will actually induct members of other Races into the dwaheely clan. 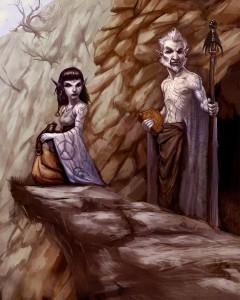 Their intelligence and affinity with Mental Energy gives dwaheelies the skills needed to influence those in power.  Dwaheelies are often sought out by the leaders of nations and kingdoms as advisors and consultants on matters military, economic, and social.

Their distinctive cape-like wings stretch between their arms and bodies.  Dwaheelies call this membrane their “skin,” referring both to their genealogy and their individual identity.  This skin is run through with veins in familial patterns, parts of which are often shared by their ancestors.  Each dwaheely also has a set of tattoos acquired throughout their lifetime.  A young dwaheely can be immediately identified because of their lack of tattoos, while a very old dwaheely will have a particular and complex series of tattoos that describe their life’s journey.  Dwaheelies show significant pride in their patterns, both natural and folk-made.

Since they first came into being, dwaheelies have made their homes in the many mountains of the continent, where they have created living quarters in naturally formed caves.  Their homes are well-known for their light wooden architecture, which fills the caverns where they live.  These are frequently multi-level, often with intricate stairways that create corridors in the upper regions of the caves.  However, dwaheelies have no fear of living in other places.  For many centuries they have made themselves a part of every major city on Tamarra, and are found in virtually every region of the continent.

As mentioned earlier, dwaheelies have a strong interest in their ancestry; every self-respecting dwaheely can trace their lineage back hundreds or thousands of years, and recite their clan history by heart.  Clans can range in size from a few dozen individuals to many thousands.  Most are well known to the community at large; however, some “hidden” clans, or Invisible Dwaheelies, go to great lengths to hide their existence from the greater world, and even from other dwaheelies..  It is widely believed that these clans are scattered throughout the continent.  There are rumors of clans that secretly influence the decisions made by kings and rulers in an effort to steer the politics of the Tamarran Continent.  The members of these hidden clans often use their Mentarch skills and Powers to ensure that they remain unknown to the general populace.

There is much more to tell of these powerful and oft-times inscrutable members of the Ten Races.  We will tell more in the stories to follow.