Dwarves are known for their strong affinity with Physic Energy, the Energy that makes up the physical world and the forces therein.  Although they are not very tall (3-6 feet, with an average of 5.5 feet), this affinity makes them physically strong and very sturdy.  Many become powerful Evokers and great warriors, wielding Powers based on Physic Energy. Other dwarves use their affinity with Physic to mold the matter of the world, such as silver, gold, and iron, into many different forms, such as household furnishings, fine art, or high-quality tools and weapons. Whatever they choose to do, they take great pride in their endeavors. 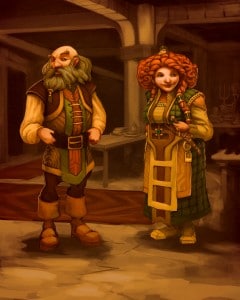 Because of their affinity with Physic Energy, dwarves love stone. Indeed, several dwarf clans founded the great underground portions of Naldrin City (see map of the Tamarran Continent) by building homes and huge structures in the caverns below the Nashem Mountains; they live there to this day. Many dwarves live in the extensive cavern systems that lie beneath the surface of Tamarra.

Dwarves have a very strong clan structure: most dwarves, if not all, belong to a clan, of which they are very proud. Major dwarf clans number in the tens of thousands, although there are some clans of only a few hundred, a few dozen, or even just a particularly stubborn handful.  No matter the size, the ruling structure of clans is invariably top-down from a single ruler (of either gender) who governs with a firm hand.

It is quite common for dwarves to have disagreements with their clan and break away to join another. This can happen for a variety of reason: strong political beliefs, a battle for power and leadership, or something as small as a disagreement between one group of cigar-loving dwarves and the rest of their clan who prefer pipes.

Dwarf clans are often formed around location, providing society and protection for those in the area.  However, some form around a particular skill set, such as crafting metal implements or weapons.  Dwarf Evokers, who have a particular interest in fortifying the stone that make up walls or buildings, might come together in their own clan; another clan might be based on a political ideal. There is even rumored to be a group of dwarf sorcerers calling themselves the Tallakkarr Clan, who use chants to control metalwork.

One of the more interesting clans, and one of the oldest stories in their voluminous genealogy, is that formed by the great dwarf sorcerer Darkklaven.  Darkklaven broke away from his home clan (nobody’s quite sure which that was) in the year SP~2,073 (almost three thousand years ago) to form the Clan of the Middle Abysm.  This clan was a small nation of less than a hundred dwarves who came together to explore the very deepest parts of the extensive cavern system that runs under, and throughout, the Tamarran Continent.  It is said that the Clan of the Middle Abysm went into the very bowels of the Fekxtah (planet) Ethem, going farther than any other folk had ever gone.  This clan became legendary in its discoveries and exploits.  By now the clan is perhaps more myth than reality, since they have not been heard from in centuries.  Even so, rumors still persist that they live on in the deepest regions of the world and have unprecedented knowledge of the innards of Ethem.

Dwarves are a multi-talented, far-ranging, passionate Race. While they can be strong, loyal warriors, they can also produce some of the most delicate jewelry and finest armor found anywhere on the continent. While they love caverns and life below ground, they can also be found in the towns, cities, and kingdoms that populate the Tamarran continent.  They are on the plains and the deserts of Tamarra, on top of the mountains, deep in the forests, and even along the lakes and waterways throughout the land.  Regardless of where they live, they make themselves a strong participant in their chosen homeland and are, frequently, passionate voices in that community.

There is much more to tell about the many dwarf clans and folk.  Watch for more stories!