Humans are, well, just what you would think.  For the most part.

Physically, humans in Tamarra look the way you would expect.  They stand anywhere from four to seven feet tall, though most are in the center of that range.  They have the usual two arms, two legs, two eyes, two ears, one nose, and one mouth.  They are not the strongest or fastest of the Ten Races, nor are they the largest or the smallest. 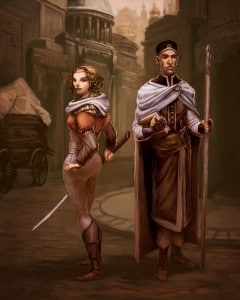 There is one notable difference between human physiology in the Beyonder world and humans in our world.  In the Beyonder world humans are able to exhibit a wide range of hair and eye colors.  When they are young, humans have the ability to change their hair and eye colors at will, which is a source of great fun.  There are frequent schoolyard contests to see who can produce the most outrageous colors in the shortest amount of time.

As humans reach adulthood, their ability to change hair or eye color is much reduced, as is the range of colors.  It usually happens when Emotion Energy runs high.  Sometimes this is involuntary, when the human (the Player Character, or PC) temporarily loses control.  Suffice it to say that when a human becomes an adult they will choose an eye color that will become, for the most part, permanent.  This is an important decision, and usually involves a great deal of discussion among family members and close friends.  Their adult eye color becomes part of a coming of age ceremony that introduces a human child into the adult world.  This, along with the presentation of their adult name, is the core of most human ceremonies of the rite of passage.  We’ll talk in more detail about this ceremony, typically referred to as the Alinsan Ahtifal, in a later blog.

Humans are good at noticing social interactions, and they are often highly skilled Charismatics. Because of their strong affinity with Emotion Energy, they have outstanding social skills, and are best known across the continent for their excellence at working in groups. They are excellent collaborators on a small team, and can contribute just as meaningfully to a large social organization such as a city government or the far-reaching interpersonal networks of kingdom or nation.

Given how socially adept they are, it will come as no surprise that humans are at ease in any place across the Tamarran Continent.  More than any of the Ten Races, they will be found almost everyone you travel.  They are similarly adaptable in the kinds of homes they inhabit: they tend to live in whatever housing is standard for a given area.

We have only skimmed the surface of what there is to know about humans and their societies. Although they blend in with most any social network or community, there are some organizations that are created solely by, and for, humans.  We will talk about these secret organizations, and more about humans, in blogs yet to come.