The wellyn are a small people who blend in well with their forest homelands, which helps them to pull off the pranks for which they are famous.  They are quite short, usually between two to four feet, although they often seem smaller, as they are prone to running (astonishingly quickly) on all fours.  They are covered in a layer of fur that ranges from light green to dark brown, often striped, which makes for good camouflage. Their long tail is agile, and can be used as an extra hand.  Their life span of about 55 years is shorter than others of the Ten Races, who live anywhere from 70 to 180 years of age. 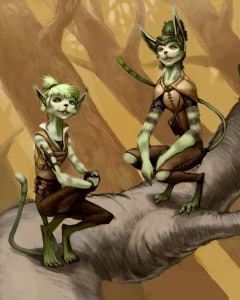 The wellyn are known all over the Tamarran Continent as tricksters. Depending on who you ask, this might be a good thing or a bad one.  Some believe that they bring a little levity into a world that has too much sorrow.  Others consider them a dangerous blight on society, causing massive collateral damage to satisfy their infantile need to outdo their rival.  On some rare occasions these pranks escalate to the point of causing mortal damage.

One of the most infamous wellyn pranks of all time was performed by two wellyn simultaneously.  Slendil planned to hide in the closet of  his friend, Gorlin, until Gorlin came home, at which point Slendil would jump out and frighten him.  Unbeknownst to Slendil, Gorlin had planned to perform the same prank on Slendil on the same day.  The two were so committed to their task that they refused to leave until the other showed up; as a result, both starved to death.  This is considered one of the few times in wellyn history that a prank competition ended in a draw.

Many scholars have speculated as to why the wellyn behave the way they do.  Some believe it is their relatively short lifespan that pushes them to live life to the fullest and ignore the consequences.  Others say that their strong affinity with Shadow Energy drives them to break the rules as often as possible.  Whatever the reason, people have to be on their toes when wellyn are around, or they may find themselves the target of a practical joke before they have time to react.

Since their inception the wellyn have lived in the tree-tops, so their most natural home is in the forests of the Tamarran Continent.  This living space has always provided some amount of safety from their many predators, who are drawn to them because their small size makes them vulnerable. However, for the last several centuries it has been quite common to find wellyn living throughout the continent, especially in its many cities, where they can find endless opportunities for pranks.

Pranks aside, if wellyn can redirect focus to a more productive task, they can be quite useful.  They are excellent at sneaking around and getting into and out of places they are not supposed to be.  Their affinity for Shadow Energy makes them nearly unrivaled as master Umbrists.  Mix that with their love of tinkering and a passion for creating automata and you’ve got a useful companion or a fierce foe, depending on the circumstance.

There is much more to be said about wellyn society and the unique mix of skill and guile that makes them tick, but we’ll save that for another blog.