— Achrovach, Ushen Teller of History.  Achrovach’s first treatise about the Crown of Drawnwyn is a brief overview of the Crown and the seven “Eyes” that comprise it.  This second installment describes the making of the Crown; future passages will relate its history.

In the year SP~3,683 it became clear to a cabal of powerful Guild members that the despot Samron was planning to extend his empire over the entire continent of Tamarra.  The original members of the cabal, a half dozen highly experienced Cataloguers within the Acquisitions & Archival Department of the GERC (Guild Energetic Research Coalition), soon realized that if they were to stop Samron, they would need the help of other GERC members.  However, they knew that the larger their group, the greater the chance that they would be discovered (and “dispatched”).  In the end, they reached out to two members of the GERC’s Energetic Experimental Group (EEG) and three members of the Materials Development Division (MDD). 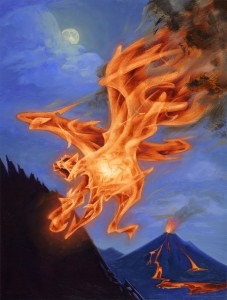 At first this small group of subversives was at a loss as to how they might combat a foe as mighty as Samron had become.  However, one of the members of the MDD, an ishiri evoker by the name of Odaddun, recalled accounts of the Izhen, also known as the Eyes of the Elzheni.  These were seven stones that, as legend had it, were created by the Elzheni during the prior Era of the World, and were said to wield great control over the Six Energies — the fundamental building blocks of the world itself.  Even if they did exist, the whereabouts of the Izhen were unknown. The search for the Izhen is a story of its own, and would need many more words to recount than we have here.  Suffice it to say that with the help of the Sorcerers, the Guilds’ long-time foes, after many years and great cost, the Izhen were recovered.

It was decided that the Izhen would be most powerful if they could be controlled by a single individual.  The person with the greatest natural abilities for this job was Samron’s granddaughter, Drawnwyn, who had demonstrated from birth a tremendous affinity with each of the Six Energies.  She also had a resistance to the effects that the Energies could have on an individual, which could cripple their physical (and Energetic) form.

The next step was to give Drawnwyn the Izhen in a form that would allow her to use them most effectively.  It was decided that a crown would be the best way to provide her access to the seven Eyes.  The hope was that Drawnwyn would defeat her grandfather and become the ruler to replace him, wearing the crown of power that had defeated the despot.  This is when the cabal recruited Elem Nemma for the task of making the Crown.

Elem Nemma realized early on that the Crown was far from ornamental: it had to withstand great mundane as well as Energetic assaults.  For this reason she chose to make the base from a rare material called “ruttar,” which is formed when an intensely vibrant flamen* descends from the sky and touches the earth and stone of the world.  Ruttar’s rich grey sheen makes the circlet of the crown seem visible, yet almost without discernible form.  Running through the grey base of this material are faint streaks of other, darker colors — hues of black, deep blues, and even thin threads of gold, red, and orange.  Six bands rise up from the base to form a center piece several inches above.  Nemma set an Eye on each of these six bands, immediately above the base, with each Eye placed on the opposite side from the Eye of its opposing Energy.  For example, the Eye of Koldep, aligned with Mental Energy,  is on the opposite side of the crown from the Eye of Amdrath, aligned with Emotion Energy.  Finally, at the top of the crown, Nemma placed the seventh Eye, the Eye of Dey, which has the ability to link the Energies of each Eye so that they all act as one.

In the caverns within the Nashem Mountains just north of Naldrin City, on the month and day of Tasz 44, SP~3,722 the cabal presented the Crown to Drawnwyn.  The results are well known in the history of Tamarra: the Eyes of Drawnwyn, as they were then called, were the decisive factor in the final defeat of the Emperor Samron in SP~3,725.  Even today, the day of Tasz 44 is celebrated across the Tamarran Continent as the day of the defeat of Samron, and of tyranny.

*See “Imbelnhi’s Bestiary” for more information on this fascinating creature.