The history of the Crown of Drawnwyn is older, and far more complicated, than most folk of the Continent realize.  I will attempt to provide a synopsis, and a very brief one at that, in the informal treatise below. — Achrovach, Ushen Teller of History.

The history of the Great Crown, as it is often fondly referred to, is best understood in three parts.

The first part of this history began many thousands of years ago, during the Second Era of the Fifth Age of the World, the era immediately prior to our own.  This was the time of the immortal races of creatures, the very first races to exist on our dear Ethem.

The Seven Great Stones, as they were called at that time, were created by the Elzheni, perhaps the most accomplished Race of that period. They were responsible for so many magnificent creations, not least of which was the building of the Great City of Angzhelling on this, our Tamarran Continent.  No one knows now where Angzhelling might be; however…ah, it is so difficult to be brief!  The Stones were created by the great Elzheni genius, Dey Affa.  One was created for each of the Six Energies, and another was created to allow the six Stones to act as One.  At this time each Stone was used for its own purpose.  There was no Crown.* 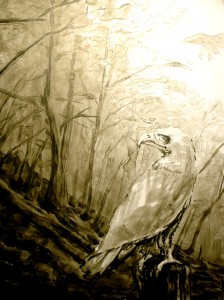 The second part of this fascinating history deals with the creation of the Crown of Drawnwyn from the Seven Stones. In the year SP~3,721, the great ishiri artist Elem Nemma began creating the Crown of Drawnwyn for the Seven Stones.  The Stones became known as “Eyes,” because each Eye gave its owner the ability to see into the Energy Realm with which it was associated (the Eye of Dey had the ability to see into them all by seeing through each of the other six).  The following year, in the Nashem Mountains in the old part of Naldrin City, the completed Crown of the Seven Eyes was presented to Drawnwyn.  The rest, as they say (I’ve said it myself), is history!

And now we come to the third and final part of this history: the education of Drawnwyn.  As powerful as the Crown of the Seven Eyes was, it was nothing to anyone without the skill and strength to control it.  At the very least, anyone who aspired to use the Crown must have overcome Barriers in each of the Six Energies.

It is not entirely clear how long Drawnwyn spent establishing a connection with the Seven Eyes.  Some say it was only a matter of days, but these stories are surely apocryphal, believed only by those who consider Drawnwyn to be akin to a god.  It is likely that she spent several months learning to align with and wield the power of the Crown.  Most accounts indicate that after the presentation of  the Crown, she went immediately to the deeper reaches of Old Naldrin City.  The training was arduous and exhausting, requiring Drawnwyn to call upon every skill she possessed in order to maintain her inner essence while aligning with the Eyes.

At the end of this training Drawnwyn emerged with what would from then on be called the Crown of Drawnwyn.  She was ready for the great battle with the Emperor Samron.

It is known that the Crown and the Seven Eyes still exist.  The Eyes have been separated from the Crown and scattered, but they still remain somewhere on the Tamarran Continent.  We will talk more about this, and the recent rumors as to the whereabouts of the Crown and the Eyes, in subsequent blogs.

*For the full history of the Stones and their Elzheni masters, you must get a copy of my book, “The Elzheni in Their Greatness: A Story of the Second Era of the Fifth Age of the World and a Short Account of what Came before us, and Continues to Guide Us.”  In this fine tome you will come to understand how these seven powerful Stones were used, and misused, by a small group of Elzheni; where the Stones ended up after they attained their freedom; and how, eventually, they were key to the end of the Elzheni race and the final days of the Second Era itself.