Shem Amaum on the Rise: Council of Drawnwyn No Help 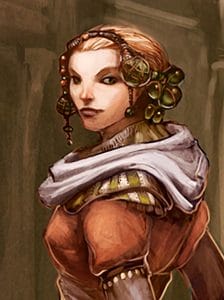 The dreaded shem amaum have launched two highly visible attacks against key sites on the Tamarran Continent in the last day.  As readers will recall, the shem amaum are the savage beasts created by the Nulentians and used against Tamarra during their most recent invasion of our Continent in the years SP~4,970 – 4,974.  Physically, they stand between four and five feet in height with extremely tough, thick hide that is quite rough, like small sharp rocks packed together with matts of course, stiff hair.  According to accounts, simply running your hands lightly over the body of a shem amaum will leave you with cuts that then blister due to a thick toxic substance that covers parts of their bodies and oozes from the fissures that criss-cross their bodies.  Their tails are long and thin with barbs running along their dorsal side.  Their heads are broader at their base than their peak, with a flat noseless, and strangely smooth, face.  They have a highly keen sense of smell, but none of the experts we consulted seemed to know where that sensory apparatus was on their bodies.  Beyond doubt their oddest anatomical attribute is the ability to stretch their body out to two or more times its normal height, or length, as you perspective dictates.

One of the recent shem amaum attacks occurred yesterday, the 6th day of the month of Kalkix, pitting a force of slightly more than a dozen of these beasts against the guards and workers at Port Naldrin, less than 10 miles from the metropolitan areas east of Naldrin City.  The second, in today’s early morning hours, was an attack against the North Gate of the City of Tarnath, hundreds of miles southeast of us.

The local port master at Port Naldrin, zweyjen Deldrin Zheshallay, said the attack came from the edges of the Nashem Mountains that lie between Naldrin City and Port Naldrin.  According to him, some 12-15 shem amaum attacked the section of the port that performs repair work on large ships.  The attack occurred at mid-day, when most of the workers and guards were on their mid-day break.  When they burst out of a copse of trees near the repair docks, the shem amaum were armed with their traditional curved scimitar-like swords and long plain daggers.

According to Port Master Zheshallay, “They were beasts.  They had no mercy.  They cut through my folk like a fall harvest.”  Current count is that 26 workers were left dead, and as many as 50 wounded to various degrees.  The toll would have been much higher, but a troop of dwarven knights on leave happened to be in the area.  Within fifteen minutes they had engaged the shem amaum and driven them back into the hills.  As is typical of a battle with shem amaum, if any the hateful creatures died in the battle their bodies were taken away by their comrades.

The details of the second attack are still unfolding, as it happened only hours ago, and we’ve had only scattered reports via blink bats.  It is clear, however, that the attack came from inside the North Gate enclosure, which was built during the early days of the Emperor Samron.  The walls of the Gate are 30 feet high (in some places even higher), and can hold a guard of several hundred, although there were not nearly that many people there at the time of the attack.

We are in contact with our colleagues at the Tarnath Times and will provide more details about that attack in later editions.

Council of Drawnwyn President Kissalki Narradi, popularly known as “the wellyn with no humor”, released a statement that, “the council is seriously concerned by these recent events, and the perpetrators will be dealt with.”  The reaction from Naldrinians was, generally, disbelief and rage that the Council was oblivious to threats so close to the city.