Although heola* tend to be tall and thin, they are far from fragile: their stamina and physical endurance, especially in the hottest regions of the Tamarran Continent, are legendary.  Because of their ability to withstand extremely hot, dry climates, they often make their home in the deep desert, where not even crawn can comfortably survive.  The ability to survive such extreme conditions is due, at least in part, to their strong affinity with Spirit Energy.  Like the ishiri, the kamari, and the zweyjen, they are descendants of the ancient Elzheni race, powerful beings that lived in the Second Era of the current age of the world, the Fifth Age.  (We’ll discuss the Elzheni in future blogs.) 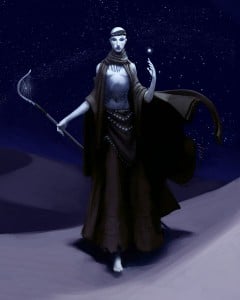 Heolas skin is usually a subtle brown or gray, like the colors of the desert, with a smooth texture akin to rubbing your hand over a fine soft sand.  During extreme exertion, a heolas may exhale small bits of sand.  Heola are without biological sex: they are neither male nor female.  They give birth through a process closely connected to the stars that they love and often worship.

Heola, who are known for their quiet demeanor and thoughtful ways, are often hard to read.  Unlike most other creatures, they have no real interest in geographical or political conquest.  They are usually guided by the stars, with which they have a strong connection.  They maintain deep bonds, particularly with their extended family, and many live in communities with other heola. Those who live in a larger community with a variety of Races keep close ties to other heola within that community.  There are, though, heola who are wanderers —  as some would say, “seekers of the truth” — in keeping with the inquisitive minds characteristic of the Race.

A complex set of relationships within heolas society provides them with support throughout their long lives — heola often live to be 180 years old.  Each newborn is immediately provided with a set of caretakers who will look after them and teach them as they grow.  When they reach adulthood at the age of 50, every heolas passes through an elaborate ceremony inducting them into the adult community and introducing them to a set of adults, called their star-kin tribe, who will act as their companions and guides in life.  At least one of the star-kin tribe will be an elder heolas, who are expected to provide wisdom to those they protect.  There is great reverence for heola elders, and disobedience to their guidance is met with strong disapproval.

There is much more to tell of heola society, including the “White Heola” who live in the Icy Wastes in the very northern parts of the continent.  These tales will have to wait for future blogs.

*Editor’s note: The singular form is heolas; the plural is heola.