Ishiris are a tall and imposing race, with an intimate understanding of all things made of stone and a strong affinity with Physic Energy.  They resemble the rock of the world around them, with skin most often gray, with a rough texture — like running a hand over a mountain boulder.  Ishiri have hair in various shades of gray and silver, sometimes with sprinkles of black and white.  They tend to be between five and seven feet, with a broad, solid build made for living around, and 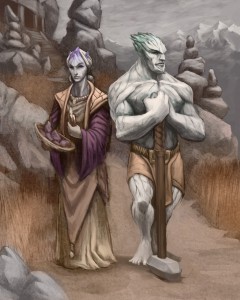 working with, stone.  Their height no doubt comes, at least in part, from their Elzheni ancestors. Some rare ishiri have hair with streaks of color reminiscent of the brilliance of gemstones; there can also be traces of these colors on ears, fingers, and other extremities.  Family lineage can often be traced by specific coloration. Although it’s attractive, there is no correlation between this and their innate abilities.

Temperamentally, ishiris tend to be serious and practical.  Although they are unafraid of strangers and at home in any part of the Tamarran Continent, they are typically very reserved.  It takes a long time for them to fully trust strangers, and some may never reach that point.

The heart of ishiri society is the family. As circumspect as they are with strangers, the opposite is true with their loved ones: families are open and intimate and often live in compounds that can include several generations.  Since ishiris can live to be one hundred years old, some family enclaves can have as many as five generations. Ties are also strong among the families that comprise an ishiri clan.

Although ishiris live throughout the Tamarran Continent, their preferred home is in the mountains formed of the stone they hold dear.  Unlike their dwarf cousins, who also have a love of stone, ishiri prefer to live on top of mountains rather than under them.  It is unusual to find a mountain range or peak with no trace of ishiri.

One of the best known ishiri settlements is in Naldrin City, a center of cosmopolitan activity on the Tamarran Continent. The city is located in north central Tamarra, at the southern end of the Nashem Mountains close to Port Naldrin.  It is a seat of law (and bureaucracy), and home to the Council of Drawnwyn, the de facto center of politics and governance for the many nations of the continent.  Naldrin City is quite old: it was founded by both ishiris and dwarves in the year SP~2,559.  The dwarves built the city that exists under the mountain, and the ishiris built the city on the top.

The buildings, roadways, walls, and other features of the tiered city of Naldrin are one of the wonders to behold.  The styles vary from one ishiri architect to the next, but a distinct ishiri architectural style combines the sturdy quality of large blocks of smooth stone, often built quite high or wide, with ornamentation surrounding doors or other openings in the walls.  There are often long historical reliefs in the walls’ stone.  This definitely should not be missed by anyone who travels the Tamarran Continent.

We will talk more about these wonders, and others, in blogs to come.