Zweyjen love the seas and oceans of the world, and their homes are typically found near the shores of these great bodies of water.  Their smooth, sleek skin is made up of thousands of very fine scales that protect them from variations of heat and cold in water and provides a buffer against the harsh climes at the water edge. They have short bristles and occasional long whiskers across their bodies.  Their fins, whose configuration varies greatly, share common patterns within families. 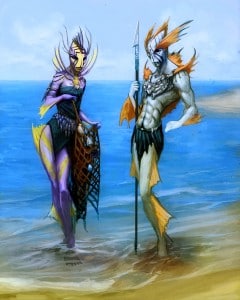 Known for their vivid hues, zweyjen display the greatest assortment of colors of all the Ten Races. This often hereditary coloring usually includes sea-blue, but they can also have beautiful purples and oranges, shimmering greens and yellows, and everything in between. They have a set of vestigial gills, which are not as functional as those of fish, but do have sufficient capacity to allow them to survive under the water for much longer than any of the other of the Ten Races.

One of the most distinguishing characteristics of the zweyjen race is their wanderlust.  In spite of their affinity to water they are able travelers, and can be found in most areas of the continent (although the desert poses a significant challenge). They are always interested in new places and new people, and although they generally find it hard to be confined to a single place for any length of time.  The zweyjen who live in the coastal cities will usually take a “leave” of sorts every 2-3 years to travel.  It is of course, quite typical for this travel to be on the oceans, and zweyjen serve as the largest contingent of merchant sailors on the continent.  However, they also strongly desire to see how others live, and so are found in the mountains, forests, and non-coastal cities of the continent.

As perhaps the greatest travelers of the Ten, the zweyjen have a comprehensive knowledge of the Tamarran Continent, and many turn to them for this knowledge.  Zweyjen have strong language skills that derive from their affinity to Mental Energy, and they emphasize languages in their education. This allows them to establish personal relationships with many different races and creatures they meet, including creatures of the sea, such as marblins and spallith, whose kingdoms are very wide and deep.  They have also formed fast friendships with the martles, whom they consider to be fellow travelers of the world.

Their relationships with other zweyjen are often strong and long-lasting. Many have heard the tales of the abiding love between the zweyjen seafarer Kwuemwan and his partner Imbelnhi, intrepid naturalist and author of Imbelnhi’s Bestiary: Being a Traveler’s Account of our Continent and her Creatures.  Imbelnhi mentions Kwuemwan many times in his writings, and included his discoveries in his research for the Bestiary.

There is more to zweyjen culture than can be covered here.  Subsequent blog entries will talk about the Zeshar, a society of explorers of the very deepest parts of the oceans of the world (which connect Ethem’s many oceans), and the Tzhemmenshall, who are masters of the craft of building sea vessels.