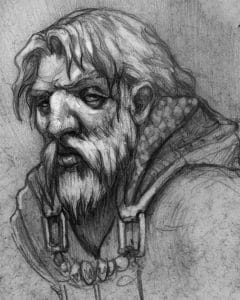 – Excerpt from A Floating Mountain: The Rise and Fall of the Gguro Dwarven Navy, by Jon Tamm, Travelling Bard and part-time Professor of Linguistics, Naldrin’s First University

The savvy reader may notice a number of instances in which Dwarven words are transliterated using double consonants – the most common being “kk” or “vv.” This notation is part of the Barlant transliteration system, far and away the most common style of Dwarven language transliteration in Tamarra. The double letters are what we call “intoned letters,” and they are but the tip of the iceberg in what many linguists consider the most complex language widely spoken on Tamarra.

The evolution of dwarven language is wrapped up inextricably in the long history of dwarven singing. This singing, as readers no doubt know, is known for its characteristic, shudderingly deep bass notes. Now, these sounds are used not only in song, but as part of the dwarven language; consonants can be pronounced either with or without an accompanying deep hum (the vvo) in a dwarf’s chest, changing the meaning of the letter as completely as if a human pronounced “p” instead of “m.” The word “kkanif,” for instance, denotes a certain type of metal-studded shield, while “kanif” denotes a particularly aggressive cat.

As if this weren’t enough, dwarven is also a tonal language (yes, “intoned” means something entirely different from “tonal.” Take it up with Barlant). There are four different tones with which any given syllable can be pronounced regardless of whether its letters are intoned (it shares this with the dwaheely language, which has six different tones). That is, the transliteration “kánif“ means that kan is pronounced in a rising tone, while if is in a neutral tone. This particular tonality denotes the aggressive cat we’ve mentioned before, but “käníf“ (kän in flat, low tone followed by íf in rising tone) is a type of ladle. “Kkánif“ (notice that we’ve now included the vvo!) is a meaningless nonsense word.

Any letter in Dwarven could technically be intoned, but some intonations are found only in antiquated texts written in First Dwarven or Middle Dwarven[1]. For instance, Modern Dwarven contains no instances of the intoned pp, gg, or hh (among others); the most common intonations by far are kk and vv. Contrast this with First Dwarven, when the intoned hh was not only a common consonant, but also used as a vowel. Nowadays the vvo has also taken on a significant slang usage; introducing a vvo in antiquated letters like hh has become quite fashionable among the youth, perhaps denoting a kind of disdain for historically proper speech.

The particularly tricky thing for non-dwarves learning Dwarven, aside from the tonality and its exceedingly complex grammar (the topic for another book entirely, let me tell you) and mastering the connotations of intoning some letters over others, is that no other races can truly pronounce the vvo. This is on a simple biological level; dwarves appear to have some adjunctive laryngeal structures that allow for the possibility of the vvo’s pronunciation. Some ushens and ishiris – even some humans – can imitate the sound passably enough that a dwarf would know they were trying to intone their letters, but this is far from the real thing. The major dwarven cities these days are quite cosmopolitan, and thus many dwarves have learned to accept the un-intoned dialect that foreigners are forced to speak – but any rural dwarven population will find mistakes like “kkanif”/”kanif” absolutely hilarious.

It is worth noting that there is an exception to this: Soman training has been shown to allow true pronunciation of the vvo. Indeed, there is a specialized subset of translators within the GERC. The Voices, as they are called, have all transcended Barriers in both Mental and Body; the former allows for fluency in a simply tremendous number of languages, while the latter allows them to modify their body to accurately pronounce race-specific sounds: the Dwarven vvo, the four sibilances of the Crawn language Szastak, and many more.