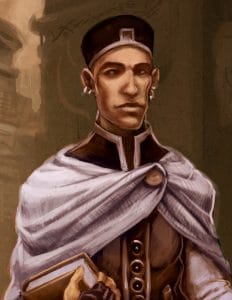 Timmarint here, your source in getting to the bottom of rumors.  This time it’s about city officials. According to sources in the government and a few influential organizations, a search is on for a jewel from the Crown of Drawnwyn, a very powerful artifact that could affect who controls  Tarnath, and perhaps the entire region.

Our leads almost all concurred that Teetl and Yov, the best known private detectives anywhere on the Continent, have been hunting down this artifact for a well-placed client.  As most readers will know, Teetl, a dwaheely, and his partner Yov, an ushen, have been working together for over two decades now. And they don’t come cheap. This reporter was determined to get the scoop from the famous duo about what part they played in this hunt, if any.

We arranged to meet at the Hungry Oogert Inn in the Great Northeast, one of the best neighborhoods in Tarnath for excellent dining.  I’d met these masters of sleuthing on several occasions, but never one to one (or two). When I saw them approach, I was immediately struck by the sight of these two walking down the dusty street.  Teetl sets a quick pace as if he’s always in a hurry, and Yov, who dwarfs his tiny companion, takes one large easy step after another.  Even so, it works. Somehow.

We sat down for an early breakfast, just after sunrise.  I had the eggs and several slices of phrellas belly — best in the city in my opinion. Teetl is the more talkative; Yov tends to be quiet, but he’s sharp as a nail.  We spent some time with pleasantries as well as details of some of their most recent cases, which they were happy to discuss. The conversation got loose and fluid, and then got to my real questions.

TB: I hear that you recently did a bit of work for Mayor Sympriono.

Teetl: We’ve worked for the mayor a number of times over the years. He’s a good guy – he’s always treated us fairly and honestly.

TB: Yes, I agree.  We’ve always had good things to say about him in the Chronicle.

TB: Thanks for that.  Yes, I consider it a point of pride to get the details right on every story I write.  Like, I’ve heard from a number of contacts, I won’t name who, that the tunnels under Old Naldrin City are pretty nasty.

TB: And mostly under water now.

TB: And, when you get down far enough, well, lots of wenbelnym… 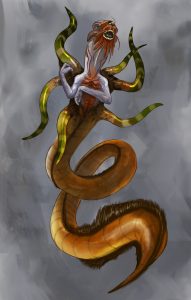 TB: I mean one wenbelnym is dangerous, but a swarm of them?  Emotional daemons are tough enough when they’re physical weaklings, but these guys are like twenty-foot long eels, and they can take you out!

I see Teetl glance at Yov, who gives him a knowing look.

At this point, both of my breakfast companions begin to squirm a bit in their chairs, so I go for the big question.

TB: I mean, you don’t get a chance to snag an Eye from the Crown of Drawnwyn every day.

Teetl: (ahem) I don’t know what you’re talking about.

TB: The Eye of Amdrath, right?  The one that controls Emotion Energy?.

TB: You gotta have a lot of courage and smarts, taking on all those wenbelnym and coming out alive.

Yov stands up abruptly.  Teetl rubs his left arm as if remembering something unpleasant.

They give each other a knowing look.  Teetl stands up.

Teetl: Our thanks for the meal.

TB: So the mayor’s a very happy client, I assume?

Teetl (who stares in a way I wouldn’t have imagined he could), through pursed lips: We don’t discuss our clients!”

Next thing I saw was the backs of these two as they briskly made their way out of the Hungry Oogert.

And now, dear readers, we have some pretty convincing evidence that at least one of the famous Eyes from the Crown of Drawnwyn may be among us, and –  dare we speculate – in use against us?