Since releasing Beyonder we’ve gotten many questions about our world, especially The Ten Races.  In response, we’re happy to announce Heola: the Starborn, the first in a series of ten books about The Ten Races, coming soon! 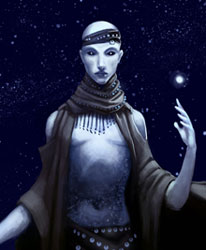 The books will describe the origins, history, and modern life of each Race, and provide a new set of Ancestral Abilities for each one. They will help you to create depth in your stories, and more potential actions for your characters. For a glimpse of these new Ancestral Abilities, keep reading!

As with all things in the Beyonderverse, everything is derived from the Six Energies.  The Ten Races have been around since the start of the Third Era of the Fifth Age of the World.  In the 5000+ years since then, the Energetic residue of the lives of generation after generation has left a permanent impression on the makeup of every individual alive today.

Great power is available to those who attune themselves to their ancestors.  The Ancestral Abilities bestowed through this connection are different for each race.  The ephemeral and mysterious Heola, for example, strengthen their ancestral connection through solitary meditation under the stars.  The stoic and passionate Crawn, on the other hand, can only achieve this power through physical training to the point of utter exhaustion, after which their Abilities reveal themselves.

What can Ancestral Abilities allow you to do? A crawn can learn to release various poisons through their bite; strike fear into enemies and inspire courage in allies with their passion; or defy death through the force of their resolve.  A heolas, on the other hand, can bond with spirits of the desert; call forth massive sand storms; or rain down starfire.

We don’t want to send out spoilers, but we hope this taste of things to come whets your appetite!  Look for our upcoming Kickstarter, beginning in mid May, to get first access to this new material and help us continue to bring the world of Beyonder to life.