There are several methods for generating characters in Beyonder, each with its own advantages and trade-offs (see Character Generation for details).  The best choice for you comes down to a balance between how quickly you want to get it done vs. how much control you want to have over the details.

Our most popular choice, especially for new players, is the Make Your Character with an Adventure method (MYCA).  MYCA is a choose-your-own-adventure style story that leads you through a day in the life of your character. You make decisions for them at each juncture, and those choices determine what sort of character you will end up with.  This allows you to build your character based not on numbers and stats, but rather on the sort of story you want to tell through your character. The details are worked out for you as you go.

I am going to walk you through a behind-the-scenes tour of how making story choices results in a character. But wait!  If you haven’t tried MYCA yet and don’t want me to spoil your first time by revealing the trick behind the magic, why don’t you pause here. Make yourself a character using the MYCA in your copy of Science of the Six (hard copy or PDF), or log in to our Beyonder Builder, where the whole process is automated for you.  When you are done you can come back and continue where you left off.

Congratulations!  Using MYCA, you just covered over 90,000 options by answering eight questions and filling out a few final details.  You are now about to embark on one of three missions to get your feet wet for the first time as an official member of the Guilds.

So who are you?  You are a member of one of the Ten Races, born in a specified neighborhood in one of three regions of the continent of Tamarra.  You’re a recent graduate of one of the six Guilds, and therefore a Channel able to wield one of the Six Energies and specializing in one of three Schools within that Guild.  In addition, you are an initiate in one of eight continent-wide Organizations. 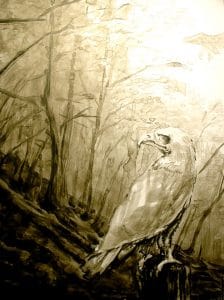 Now back to that behind-the scenes tour:  This is how you create a character using MYCA. First, your character is going to wake up and you can go about your business.  You will have to decide how to deal with your (literal) run-in with a young boy from town. You will haggle for supplies, and if you’re lucky you might run into an axterfal on the way.  These choices determine what race your character will be. Are you a practical, no-nonsense crawn? Maybe a raucous and playful wellyn? Or perhaps a serious and thoughtful dwaheely? Along with your race this will determine your Size and Move Score, give you some bonuses to Talents and Affinities, and add a few special Racial Abilities.

With your preparations taken care of, you head off to start your mission by finding Shalta, your guild contact.  You run into Shalta and his two sons just in time to help them deal with some shassels that are about to attack. The next two questions about how you deal with the shassels determine several things, including your Guild and the School within that Guild to which you belong, as well as your Affinities, your starting Powers, and your first Barrier Ability.  At this point, we give you a suggestion of how to proceed based on which race you ended up being. This is because some races have a natural predisposition toward wielding certain Energies. This doesn’t mean that you can’t make other choices, it would just be a less common choice for a member of your race to make.

Once that’s all done, Shalta asks you to go back to town and alert the authorities, but he leaves it to you to determine which authorities you should alert.  There are four options, each of which has a follow-up question that will determine which of the eight Organizations you will join as well as your Defense Ratings (DRs), and will give you a few Talent Ranks.  They essentially come in four flavors – combat, stealth, negotiation, and Energetics. The Organizations have no game-mechanical effect, but they are really interesting and well-developed in-game features. The organizations are: Diplomatic Union; Guild Energetic Research Collective (GERC); Mercenary Guild; Open Hand; Six as One; The Negotiators; Wind and Silence; and the Unnamed Organization.

Finally, you are asked to choose your first assignment.  This choice determines your starting equipment and also gives you a few more Talent Ranks.  The first choice, mapping Geo-Anatomy, is a middle-of-the-road option. You will get a basic weapon and armor, some utility equipment, and some Ranks in Scholarship, Concentration, and Survival.  The second choice, investigating the Shassels, is the fighter’s choice. You will get a good weapon and armor and some basic camping gear as well as Ranks in Perception, Leadership, and either Melee or Ranged Combat.  The third and final choice, investigating corruption in town, is good for a social or subtle character. You will get a weak weapon and no armor but a variety of utility items including lockpicks, smoke bombs, paralysis poison, and a disguise kit.

That almost wraps it up.  You choose your character’s name, gender, age, and homeland.  When choosing your homeland, you’ll see that each of the three starting areas (Tarnath, Naldrin, and Jowea) have several subregions.  Each of these will give you the option of choosing one final Talent Rank to round off your character creation. And that’s all there is to it!

I hope this sheds some light on what the choices you make throughout MYCA actually do. The MYCA method is fast and fun –  great for beginners who know what they want but don’t know how to make it, as well as advanced players who don’t want to get caught up in the min/maxing game. However, if you want to dive into the deep end of the character stats pool, we have some great options for that too.

Coming soon to a blog near you: in-depth explorations of the Quick Choice and Custom-make Your Character (CYC) methods, as well as a preview of our newest online system, which we are calling the Master Builder.