A weekly column about everything Naldrin City 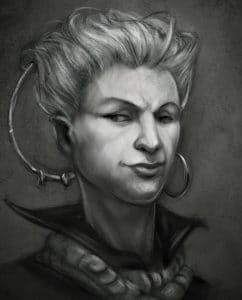 There’s some big news coming out of the Council of Drawnwyn meeting this week, and the Naldrin City Expose has the story here, first.

Insiders tell us that hostilities may be heating up between the Karrin Crawn Lands and the other major crawn kingdom on the Tamarra Continent, the Northern Kingdom of the Szaskar Crawn.

For those of you who follow the politics of the Continent this is nothing particularly new.  The crawn Kingdoms across Tamarra are constantly bickering, usually about territorial boundaries.  We’ve even seen a few incidents of crawn troops from one kingdom (or village) getting into a brush-up with their crawn neighbors.  In the last few weeks, though, the disputes have gotten a lot more serious.

My fellow reporter at the Expose, Carton Ododo, has passed along his finding that there was a two-day pitch battle only last week between forces from the Karrin Crawn Lands and the Szaskar Crawn.  The clash took place east of Naldrin City, along great Naldrin Road just a few miles from the Mizzanur Iron Works.  The battle raged on for two days as a sizable contingent from each of these mighty Crawn Empires engaged.  Carton estimates that there were at least two thousand troops on each side, and rumors were that another thousand or more had been dispatched by the Szaskar to join their comrades.  It is quite interesting how far from home the Karrin forces were.  Their lands lie on the western coast of Tamarran many hundreds of miles from this field of battle.  Several of my own sources have told me that these Karriners were marching toward the Szaskar Kingdom when they were intercepted by Szaskar forces, and that their intent was to march into Szaskar lands.

Apparently, the two sides fought to a draw even though there were significant casualties for each.  To put it another way, the Crawn way, each side claimed victory.  The leader of the Szaskar regiment claimed they had repulsed the dishonorable invaders from the west, and the Karrin forces claimed that they had convincingly defeated the larger but weaker Szaskar fighters and left them alive out of an abundance of generosity.

It looks like that was not the only ramification of the fight.  At yesterday’s meeting of the Council of Drawnwyn, there was a venomous war of words between the representatives of the two Kingdoms.  Inside sources tell me that not only were harsh words thrown between the two parties, but that swords were drawn!  The Council guards were able to intercede before any serious damage was done, but the Karrin Crawn members stormed out of the proceedings shouting that the Szaskar would regret their actions, and regret them very soon.  Haffress, the head of the Szaskar delegation then gave a rambling five-minute rant to the Council members who were still in the chamber, and then declared the meeting over.  He then tossed his chair and, along with his entire delegation, swept out of the Council chamber “with their snaky heads held particularly high”, as one member said off the record.  Of course, neither Crawn delegation was actually in charge of the meeting, so the Council, after a short break, continued with other business.

It looks like things are heating up between Karrin and Szaskar, folks!  Keep your ears to the ground and your eyes on the Expose.  We’ll bring you the latest news as soon as it becomes news!