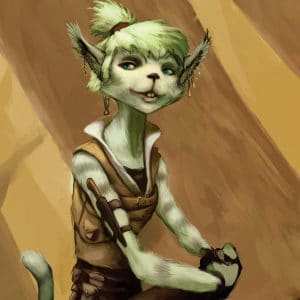 Thank you. Yes, the blanket helps. No, I… just give me a moment. I’m just… I’m still kind of reeling. We would have been dead — or worse — if you hadn’t shown up. I promise I will never again insult the Guilds.

Right, well, I suppose what happened would be important. I suppose you’re planning on going in there or some such. Enforcers… I’d heard of you, but I never fully realized just how strong you are.

Yes, hurry, I understand. Time is of the essence. So here’s how it went.

Our caravan was cresting that hill over there. There were four of us then, plus the merchant. Me, my friend Alric, and… and the two you had to kill.

It was a warm day, but out of nowhere this chill suddenly hit us. And not a natural one, either. It was this cold feeling down in your bones, colder than ice, colder than cold. The pigs started squealing and all of us stopped in our tracks. Why would we continue on that route? No good could come of it. But the merchant was a greedy one, and he wanted to take the shortest route or some of his cargo might spoil. And we needed to get paid, so… on we went.

The cold feeling persisted. As we pushed onwards, it became quiet. Huh. Never thought about that before. I suppose that’s how they got their name? Quiets.

Right. Sorry. Anyway, there were no animals in that cold area, and while it was getting slightly colder, we had no real warning. Alric and I were behind the caravan, and Korchal and Guelswue were in front. And the two of them, they just suddenly dropped to the ground. The pigs started squealing like crazy, and they bolted out off the road and back in the direction we’d come. The merchant got dragged off with them. I have no idea what happened to him. Nor do I really care. You found him? Well, I did like those pigs, so I suppose that’s for the best.

But Alric and I were standing there, our two comrades in arms suddenly lying dead on the ground. We had no idea what to think. Until they began to stir, of course. First their fingers started twitching, then their arms and legs, and finally their eyes opened and they picked themselves up off the ground. They had these terrible vacant expressions in their eyes, and suddenly the cold was coming from them, too, only worse. There was this horrible sensation in my chest, like my heart was being torn out of me, and when the pain cleared they were stumbling towards us. Shufflers. We’d heard of them. And that meant that we’d just walked right into a Quiet.

We didn’t know what to do. Everyone knows you can’t kill Undead. They were coming towards us, and we knew we were going to die, maybe even become shufflers like them… and then suddenly, this bolt of brilliant purple fire came from the heavens! And then another! And like that, the two were nothing more than burning corpses. And I saw you.

Well you know that part. You’re the one who did it. Not you? The Dwaheely over there is the… “Evoker?” You’re a… what’s a Charismatic? Well, I suppose it doesn’t matter — you seem like a good guy to me!

Hey, I’m grateful, don’t get me wrong, but… what were you doing here? You sure as hell weren’t here to save us.

There’s ambient… ambient Stillness here? Instead of ambient Spirit, like most places? Look, I have a spear and I stab things with it. That’s what I do. I have no idea what anything you just said meant.

Ha! There I agree with you. All I need to know is to stay away from Quiets. And if me and Alric might be able to get a ride home from you? Or, really, to any city? Or any place that is far from Quiets? I swear on my life that I will stay away from them forever.

Really? Thanks! Wow, it’s been great meeting you — it’s such an honor! All of you are just so impressive! Do you think maybe I could get your autograph? Just make it out to Hanni Rethki…