Oma, the Central Fekxtah of Fire 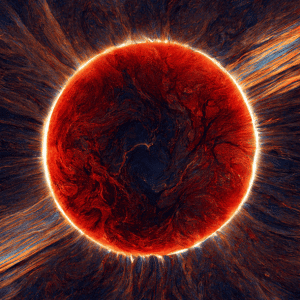 Oma the Central Fekxtah of Fire

Oma is the Fekxtah of fire that is at the center of our Solar System, which we scholars know as our Fekxtah Family.

The great Fire Fekxtah Oma has seventeen Fekxtah planets that circle her. They are roughly divided into those Fekxtah near to Oma, those that are further from Oma, and those that are distant from Oma. In addition to these, there are many Fekxtah moons and other strange objects that live in the space contained within the aura of Oma. Most of these were birthed from Oma itself, and others are celestial drifters that have joined her tribe.

Oma itself is a direct descendent of the primordial Element of Fire that was one of the first Four Elements that existed in the world. It is believed that there may be remnants of the Element of Fire buried deep in Oma’s core, but this is, of course, pure conjecture.

It is fitting to use an excerpt from “The Book of Oma”, the great book handed down to the heola of today’s world from the ancients. This book says the following:

At some time Oma formed.  It was made from the remnants of the Element of Fire as Fire itself dissolved into bits and pieces and dissolved sometimes into nothingness.  At other times, it survived in a form similar to its true form but vastly smaller with far less power.  One of these was Oma.

Few folk know that Oma comprises many living beings within its great mass. These beings are, without doubt, some of the strangest things in the wider world. In fact, many of those who study these matters believe that it is outside the ability of our minds — the minds of animals, creatures, and sentients — to understand them in their true nature. We see some of these creatures here on our own Fekxtah planet Ethem. The flamen, or at least some of them, are believed to be creatures that arose within Oma, but have made their way to Ethem across the great distances of the heavens.

The ancient texts mention many creatures. Here we will mention only a few of the more prominent of those. Short summaries of these are provided immediately below.

These creatures, when they are found here on Ethem, are known as Flamen and are powerful beings. However, on Oma they are tiny in comparison to Oma herself and to the other beings that inhabit Oma.

The life of a Fire Daemon that lives in Oma is one of constant movement, of agitation that would rip beings like ourselves to shreds. Their greatest desire (of course attributing emotions to daemons is a perilous thing) is to become all of Oma herself. This, of course, is impossible especially for a being as small as these daemons are. Nevertheless they are in constant movement and engaged in forever battles with other Fire Daemons and the other creatures of Oma.

They live primarily in the outer parts of Oma. On occasion particularly ambitious Fire Daemons will fly deeper into Oma, but they cannot go far before they are consumed by the Deeper Creatures (see below).

Fire Daemons are often cast off from Oma. Sometimes they leave of their own accord, flinging themselves into the cosmos. At other times, they are thrown away from Oma by those they battle. Regardless of how they leave Oma, many do. Most of these will continue to fight while they drift through empty space, though their efforts are useless, and really, meaningless, since there is nothing for them to fight against. Over time the vast majority of these Fire Daemons expend all of their energy and their Fire dies out. They dissipate into nothingness, or the larger of them will transform into Cinders described below.

There are, though, some Fire Daemons who, largely by chance, find themselves descending into the worlds around Oma, the Fekxtah planets or moons. As we noted earlier, those who have landed on our own Ethem are known to us as Flamen. They are rarely seen on the surface of Ethem since they prefer the fiery, molten core of Ethem, and seek that out almost immediately upon arriving on our home world.

Deeper Creatures is really a catch-all phrase for an abundance of beings, all made from Fire, that live below the surface and outer layers of Ethem. The ancient texts claim that these creatures are gigantic. In fact, the texts say that some of them are as large as the moons that circle the Fekxtah planets of Oma’s Family.

The ancient documents say little about what these creatures are or what they do, other than they are creations from Fire who are imprisoned in Oma’s core (presumably by Oma herself) and they constantly wrestle with others of their kind to consume them or to be consumed by them.

It is stated that if the Deeper Creatures were to find a way to leave the core of Oma, that Oma would die. By logical extension, Oma’s death would bring about the death of all those Fekxtah that live in the circle of Oma’s Family, and would, of course, bring an end to all life here on Ethem as we know it.

These immense bands of Fire, live on the outermost part of Oma, on her “skin” if you will. As all other creatures that live within Oma, they are in constant motion. Their motion however is a strange one. They leap away from Oma and then plunge back into her.

The ancient texts tell of these creatures as sometimes extending out from Oma as far as her nearest Fekxtah planets. They may sometimes entangle themselves with these near planets or with other invisible (unknown?) celestial bodies. Even though they exist to eventually plunge back into Oma herself, they may sometimes take many millennia or eons to do so.

With hesitation I will mention, briefly, that the ancient tomes talk about a world between the surface of Oma and her Near Fekxtah planets that is controlled by the Stretchers. The documents state that this makes travel to the Near Fekxtah quite perilous. There are even stories of travelers (Elzheni) who were trapped in this world and even inside some Stretchers themselves. Given how utterly fictitious these claims must be, I will only mention them in passing, and refuse to give them further credence.

Finally, I will mention Remnants, often referred to as Cinders. These things were once beings inside Oma, but left her (or were thrown out, as discussed earlier). They are now simply husks of dark material, virtually invisible against the blackness of space itself. How many there are is unknown, or so say the ancient texts.

Essentially, these are no longer beings. They are no longer considered Fekxtah, since a Fekxtah is a living thing. They are simply brittle physical remains of things that were once glorious creatures of Fire.