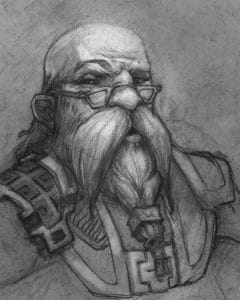 As we all know, Imbelnhi Ulanwey captured the essence of the blink bat in the marvelous prose of his Bestiary.  However, there remain many misconceptions about these odd and singular creatures. One question I am asked repeatedly by ordinary folk who approach me on the streets of the city, as well as by the most learned scholars in the halls of Naldrin University, is this: how does one carry around a blink bat when it has the ability to vanish into thin air at will?  This question is of particular interest to those who wish to hire blink bats as messengers for governments, businesses, and the wealthy.

The public’s ignorance on this topic is as profound as it is longstanding. In this short treatise I will attempt to press aside this dark shadow of nescience to reveal that which is, in the end, stunningly obvious.

Blink bats can teleport – that is, they can disappear from their current location and instantaneously re-emerge in an entirely different location.  As Imbhelni states in his well-known Bestiary; “They have a strong instinctive connection with Physic Energy that lets them find the holes and tunnels behind the space we see”.

There are two well-known ways to keep blink bats stationary without fear of teleportation. The first method relies on a rare Energetic skill possessed by a small set of particularly gifted Evokers, this author included.  This skill leverages the ability to imbue objects in the world with particular Energetic qualities, working with a rare metal to imbue it with an Energetic signature that disrupts teleportation. This metal, ellanum, is highly effective at saturating objects with Physic Energy, and is used to construct blink bat cages. This process has been passed down over many centuries by certain Evoker Guilds on the Tamarran Continent (the Naldrin City Guild is one of them).

Once the elements of the cage have been appropriately saturated with the correct amount and kind of Physic Energy, the material will hold that Energy in place for a year or more.  The imbued material creates an Energetic cloud surrounding the cage which, for lack of a better word, “confuses” any attempt a blink bat might make to perform a teleportation. We should be clear that it does not strictly prohibit the blink bat’s use of teleportation; however, it confuses their perception of physical space so that they are highly unlikely to end up where they intend.  When these creatures are kept in an Energetically imbued cage, the bats seem to sense this cloud of confusion and so remain docile, and present, in their enclosures.

The second method for keeping blink bats in place is significantly more mundane. We have discovered that these fascinating creatures are especially fond of the fruit of the charling bush, which grows throughout the Tamarran Continent, and is ubiquitous in and around the Sce Aldu Caverns*.  Each bush can produce thousands of small, red berries throughout the year.  The bushes are beautiful, with their striking red fruit attached to the bush under slender blue leaves. Most important, charling berries are as sweet as any berry or honey on the Continent, and blink bats love them.

The crux of this is that once a blink bat has discovered that someone has charling berries in their possession and is willing to share them, they will remain obediently at their side.

I thank you for your consideration of these words, and now please stop asking me this question.

* The Sce Aldu Caverns are a gigantic series of tunnels and caves under the Suong Mountains in the far southwestern part of the Tamarran Continent.  As Javeer Akcher notes, in one of his footnotes to Imbelnhi’s Bestiary, “The Sce Aldu Caverns have long been identified as the source of bizarre physical properties. Scholars at the Evoker’s Guild speculate that they lie on top of one of Ethem’s hearts, and thus potentially contain a higher density of spatial contortions than any other area on the planet!”.  This may explain why these caverns serve as the greatest habitat on Tamarra for the blink bat.