Follow this series of blog posts on moderating a role-playing game, with specifics about Beyonder.  Your own fantastic adventures lie ahead!

Got your character? Your Powers? Your friends seated around the table? Ready to play? Not quite! Your adventure would slam to a halt without a Moderator. 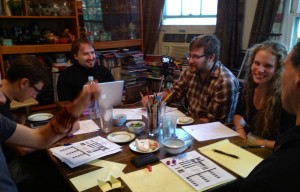 Playing Beyonder with some friends

We at Flying Nightbear Games have spent many years (decades even) creating the world of Beyonder and making it as complete and immersive as we could.  The vast majority of our products are directed toward supporting the Player Characters (PCs) as they explore the world of Beyonder —  but there is another key member of your gaming team: the Moderator.

Moderators play a crucial role any Beyonder game (you may have heard this role called a game master or dungeon master in some other games).  They breathe life into the world that your characters inhabit, and they serve as your guide through and connection to that world.  Whether you are a seasoned gamer or totally new to the RPG genre, the role of the moderator is always the most challenging, but also the most rewarding.  So, how do you moderate?  And more importantly, how can you do it well?  Let’s explore this challenge together…

The main thing to keep in mind when playing Beyonder (or any RPG for that matter) is that it is a game.  Unlike many games you have played, the goal of this game is not to win.  In fact the only way to “win” the game is to have a good time playing it.

What exactly a “good time” means can look very different depending on who’s in your group.  For some people, a light-hearted game where emphasis is put on creativity, rather than being a stickler for every rule, might be the best way to play.  Or maybe what floats your boat is meticulously calculating the chances of success and figuring out the ideal combination of Powers to become extra mighty.  Usually the sweet spot lies somewhere in the middle, but it is up to the Moderator to set the tone and adjust to fit the needs of the group.  Feel out your players and ask for feedback as you go.

As the Moderator it is often, but not always, your job to be an expert.  On what, you ask?  On just about everything.  You need to know the rules and the setting, and all the people, creatures, locations, and history of the whole world.  To learn this, you should read the rulebook (Beyonder: The Science of the Six) at least once.  We tried to make it fun and interesting, so we hope you will enjoy reading it as much as we enjoyed creating it.  You should get to know the cosmology of the world and the setting, at least around the area where your adventures will take place.  You should get acquainted with the creatures of the world, or at least the ones that you plan on using for now.

That sounds like a lot of work.  Luckily, you have a rule up your sleeve that will solve all of your problems:  the Moderator is always right.  The FNB Games team has worked to make the inner workings of Beyonder clear and consistent, as well as to provide a ton of background on the planet Ethem, the continent of Tamarra, and many locations on the continent including Tarnath, Naldrin City, and Jowea.  Everything about the game has been carefully worked out and tested for balance in ways that may not be apparent at first look.  That said, if after careful consideration you decide to deviate from canon, that is fine.  If you want to make up your own creatures, do it.  If you want to make up your own cities, do it.  If you want to change a rule, do it.  And if your players say you’re doing it wrong, just remind them: the Moderator is always right.