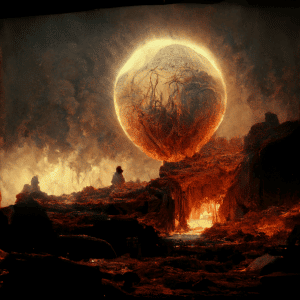 Orbital Period around Oma: 83 days, elliptical, on the plane

Like its close cousin, Been, this planet is also very close to Oma and suffers from the same unimaginably intense heat and influx of fiery beings that Oma releases. It is different from Been in that it has no Fenninthengly dedicated to protecting it from Oma’s onslaught. This is why it is a planet of molten rock, lacking Been’s solidity.

Since Beoreem has no Fenninthengly to fight off Oma’s daemons, it has become home to many of them. It is also home to a race of beings that is unique to this Fekxtah. They are called, quite appropriately, the Beoreem, and they live deep inside the planet. There they feed from the abundance of heat spread throughout the planet and its resulting soft rock forms. The Beoreem are creatures made entirely out of the rock of the planet; however, it is rock that has been transformed into living things by Oma’s fierce fire. The scholars who wrote the ancient Elzheni texts claim that the Beoreem comprise a mixture of Physic and Body Energies. Physic Energy supplies the material substance for the being. It is the molten rock that forms its substance. Body Energy has taken that physical material and has been able to transform into whole bodies that can move with direction and purpose. They further explain that the Beoreem travel throughout their planet in a way not dissimilar to how lava travels on our world. From their homes deep inside the planet they find, or create, passageways that bring them up as far as the surface of the planet. Since the surface is so extremely hot, it is an environment that welcomes the Beoreem and can nourish and sustain them.

Reports from the ancient texts tell the tales of Elzheni who visited this Fekxtah. These travelers — to be exact, those travelers who survived the journey — tell of constantly raging battles among the Fire Daemons that came from Oma. They also speak of great battles between Oma’s escaped Fire Daemons and the Beoreem. These two species of beings vie for the rich, nutritious abundance of heated rocks that cover the surface of this Fekxtah, and often devour each other to obtain that sustenance.

We will mention one other oddity that is unique to the planet Beoreem. This strangeness is called Blasterress. Unlike the Beoreem these are not living beings. They are naturally occurring phenomena that form out of the churning masses of rock and lava, often the result of the battles being fought on the surface of the planet. They can be likened to a balloon, comprising a thin covering of a light, molten rock and a large volume of gas inside it. The gasses that fill the thin rock sheath are the gasses that constantly erupt from the surface of this planet. Typically, these erupted gasses fly off into the atmosphere and even at times escape into the firmament. Sometimes, however, under just the right circumstances, the gasses erupt into a mass of this light lava and fill it like a breath fills a balloon. If the eruption is significant enough, and the molten rock is plentiful, it can form very large, incandescent orbs. The orbs are at times light enough that they will float for a while above the surface of the world and, if they are strong enough to remain stable for long enough, they may bounce from one place to another across the planet buffeted to and fro by the tremendous forces released from Beoreem.

The image of Beoreem included in this passage shows one such Blasterress as it was seen by, and captured from the mind of, an Elzhen traveler who had witnessed the event, or so the ancient texts tell us.

This Fekxtah Station on Beoreem is one of the smallest of all. The natural forces on Beoreem are simply too extreme to allow any structure to exist for long. The “station” is in fact an Energetic Avatar from our own Ethem that has been transformed into a physical object that is able to resist the violent forces of Beoreem. How an avatar could be so transformed is unclear to our current science, and there is no explanation in the ancient texts. That remains a mystery to this day. Even so, the texts tell us that this avatar, after it was transformed, was transported to Beoreem and placed somewhere on the planet that was less unstable than most other places.

A visit to Beoreem was a two-stage process. First, the avatar was “activated”, and would then transform itself into a container large enough to accommodate several Elzheni travelers. Once that expansion was complete, the travelers would transport into the interior of the avatar where they were, for a short time, protected from the ravages of Beoreem.

The texts contain many tales of the avatar folding in upon itself before the travelers were able to escape. Other tales tell of travelers who were able to exit the avatar’s body, onto the surface of Beoreem, for only a few minutes, to gather fragments of Blasterress or other interesting material. Travel to this Fekxtah Station required nothing less than great courage and significant physical strength.