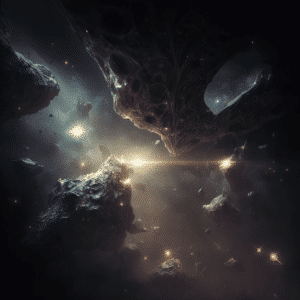 Between the Near and the Middle Fekxtah that orbit Oma there is an area of debris that the ancient texts call Seekrem’s Halo. This name derives from one of the most famous of all the Elzheni astronomical scientists, Seekrem Dal. There are fragments of knowledge about her in the ancient texts, but they are scattered (much like the ring of debris that bears her name) and only provide small glimpses into various aspects of her life. What we know of her will be included in a separate volume about the history of the Elzheni race. For our purposes in this document, we will say no more than she was born and lived out her entire life in the City of Angzhelling, the greatest of all the Elzheni cities, and, many would say, the greatest city ever constructed by a race of beings.

Seekrem’s Halo is not a single Fekxtah. Instead it is a vast area of Oma’s Family that comprises millions, or perhaps billions, of objects made of stone, metal, ice, and other rudimentary materials. Many of the ancient scholars considered it to be the fragments of one or more Fekxtah that met a ruinous fate; destroyed through cataclysmic collisions with other Fekxtah or possibly destroyed by their own internal forces. The cause is lost in the vast tangle of time; however, whatever that incipient event might have been, there is no doubt that the objects of Seekrem’s Halo are the remains of one or more extinct Fekxtah. They range in size from rocks no larger than a dwaheely’s hand to small, large, and enormous boulders, and some objects even the size of small planets.

Seekrem’s Halo stretches across an unfathomably wide extent. It begins at a distance of just beyond 200 WA from OMA and extends beyond 350 WA. Though this band of rubble is broad, it is not deep. The ancient texts claim that it is, on average, only a few hundred yards top to bottom, though there are footnotes about “mountains” in this huge ring where the detritus accumulates to create chaotic piles of rubble as much as several miles high. Whatever it might be, it is abundantly clear that it is far wider than it is deep.

As was stated there are millions, or possibly billions (the author favors the latter) of celestial objects in Seekrem’s Halo. However, because the Halo covers such an enormous area the distances between individual objects can easily be millions of miles. The exception to this come from reports in the later entries of the ancient texts that talk of clusters of objects found in the Halo. These clusters might have objects moving around and between each other only miles apart, or sometimes less. The claim is that these clusters were found using a special Energetic device that was able to reflect the image of objects at great distances. The scientists called this device Illidreth’s Reflector and placed it on one of the few planet-size objects found in Seekrem’s Halo, which is the topic of the next entry in this document. These clusters were sometimes referred to as “tribes” though the ancient texts do not make clear why such a term, usually reserved for groups of living creatures, would be applied to an aggregation of lifeless rock floating in empty space.

It was stated that the members of clusters were close enough to each other that travel was possible among them. How one would perform this travel was not explained in the ancient texts, though there was a hint provided for why one might want to do this. The claim was that movement had been detected of creatures that traveled between and among clusters’ members. This discovery motivated the Elzheni scientists (or at least some of them) to find out more about them. The result was that a number of very bold, or very foolish, scientists began a project they called “the chase”, where these scientists tried to capture, or at least come into contact with, these strange phenomena. This claim is quite bizarre, and even the vast majority of Elzheni astronomical scientists were highly skeptical of its wisdom — “If you chase nothing, then that is what you will find.” Even so, the ancient texts included a fairly lengthy account of such a chase (also referred to as a “hunt”), and some description of a creature that had no need of breath or breathing and which had an ability to draw itself toward, and repel itself away from, the fragments.

We include below a short excerpt from that text.

I have been chasing this creature for four days now without rest or sleep. I have called upon Eshree, the Goddess of Endurance, to keep me whole and strong during this hunt.

The creature I chase is a member of the race that I have named the Annastraddem, the race of the lost Fekxtah. The Annastraddem live in these barren outskirts of the Solar System, known to us as Oma’s Family. It is a place that is far from our own world of Ethem, but still within the sphere of Oma’s domination.

The speed of this creature is astounding, and its senses are far beyond what I had expected. At the end of the fourth day, it saw me. I was sitting on a drifting, house-sized boulder that was hundreds of miles away. I knew it was out there, but could not tell its exact location until I saw a flash of sunlight reflected from its sleek form as it hurtled toward another monolith nearby.

At once I launched myself toward its destination, but I was not as fast as it was. The platform on which I sailed and the field of force that surrounded it, and me, kept me safe from the brutally cold emptiness of space; however, it held me back from attaining the speed I needed to catch my prey. I chose to use Walk in a last attempt to catch up. I knew if I did not, it would be gone and the last few days would be for nought. I had trained myself on this skill, but I had not yet used it. It was powerful and it manipulated Physic Energy in ways that were very dangerous. If used properly, I would simply move to a place that I held in my mind, and, with that single step, I would be there, without the need to travel through all the space in between those two places. If I got it wrong, I could be hurt horribly or die, or worse, I could be scattered in parts to many places.

I was determined, though, not to fail my mission and, gathering my remaining strength and one quietly whispered prayer to Eshree, I took a step.

When I opened my eyes I knew I was still whole, and was glad of that. I could also immediately see that I was not where I had been an instant before. Best of all, I could see the creature hurtling toward me only seconds away.

I prepared my net, but as I did, the creature stopped in mid-flight. It had seen me, but even more surprising it had come to a complete halt by simply raising its hand.

Suddenly, all of its arms splayed out from its body in a gesture which I somehow knew was great rage. Every arm stabbed in my direction, and the creature plunged toward me. We were suddenly face-to-face with my force shield being the only thing keeping it and its piercing arms from me. My shield was shrinking, and I no longer had room to cast my net. One its sharp, rocky appendages pierced my field, and then another, and then two more. I put all my concentration into the shield. The appendages stopped for only for a second and then each of them restarted their inexorable movement toward me. I held out my hand, palm up to make a final effort to repel this invader. A small, sharp, steely needle swelled from the end of the arm in front of my palm, and suddenly it savagely thrust the stony length of its arm through my palm, into my forearm, up my elbow. It stopped at my shoulder, but I don’t know why. It took less than an instant and in that moment of time, I thought I saw this creature’s inner self. It was hard and cold and alone. Absolutely alone, but glad to be that. And, it was old. Older than the lands and seas of Ethem. Older than Ethem itself and older than Oma, the Fekxtah star at the center of her family, and Ethem’s siblings. I saw that it lived in darkness; a darkness without limit in space or in time. Then that darkness overwhelmed me.

The next thing I remembered was my dearest friend, Allmeedee looking down at my face with a terribly concerned look on his face. When he saw me wake, he moved forward to comfort me, to tell me that I was safe back in our temporary Fekxtah Station and would soon be going back to the Elzheni Kingdom and our home world. He told me that he had, by some miracle (thank Eshree), found me floating in between two giant boulders, and had brought me back. I tried to reach up to touch his cheek in thanks for saving my life, but my arm would not rise. He saw this and sadly he told me that when he found me my arm was no more than a hard, shriveled cinder of blasted rock, totally without life. It had become like the stone from the fields of Seekrem’s Halo.