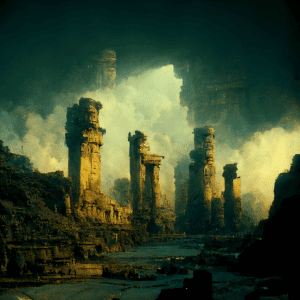 Aldrem is quite similar to Ethem, though less of its surface is made of land masses. It is not quite a “water world”, but has more extensive oceans than our own Fekxtah.

The world has two major continents, Tembra and Chongalless and many small ones, though some may view them, instead, as large islands. Each land mass has sandy plains at their edges, abutting the ocean, but their interiors contain massive mountains. The highest of these mountains is on the Tembra Continent. It is called Vellarrosz and is almost 19 miles high, a truly monumental elevation.

There are many similarities between Aldrem and our own Fekxtah, Ethem. For example, Aldrem sustains living creatures much the way Ethem does and has a great variety of them, as does Ethem. One of the major differences is that the sentient races on Aldrem live in its oceans. The abundance of creatures that live on its land have no particular intelligence, nor do they have an affinity for any of the Six Energies.

The other major difference between these two worlds is that whereas Ethem is a Spirit-inflected Fekxtah, Aldrem is instead Mental-inflected. This means that the dominant Energy, of the Six, is Mental Energy on Aldrem, and Spirit Energy on Ethem.

Neither of these differences lessens the variety or abundance of creatures on Aldrem. As a world with many large oceans, it boasts a large variety, and number, of sea-dwelling beings. In addition to being the most intelligent creatures on this Fekxtah, a number of them are also its largest. The Selleemell are gigantic sea snakes, not unlike the eels of our world; however, the Selleemell can grow to be many miles long.

The War of Sea and Land

Beyond doubt, the most famous (and infamous) of the stories from the ancient texts about Aldrem is the War of Sea and Land. This was a war fought between the creatures who dwelt on Aldrem’s continents and islands fighting against those that lived in its seas. Many scholars of the ancient texts claim that this war is more accurately described as a conflict between the Elzheni and the creatures of Aldrem’s oceans. They argue that, over the centuries, the Elzheni had come to dominate the land creatures of Aldrem, and even enslave some of them. These creatures did not have the physical or mental prowess to defy the Elzheni’s desire to rule all within their reach. Nor did these indigenous creatures have any particular affinity with the Six Energies that might have given them the strength to resist their masters. There are a few tales of singular individuals who could perform some acts of Energetic control, but these folk were very rare and, of course, untutored in how to channel their abilities.

These scholars portray the Elzheni as a haughty race that considered most, if not all, other races and creatures to be inferior to them. Because of this it was natural for the Elzheni to believe that it was well within their rights, and even their obligation, to subjugate other living beings. They easily took control of the creatures who lived on Aldrem’s land masses. However, gaining control of the seas was not nearly so simple.

Initially, relations between the Elzheni and the creatures of Aldrem’s oceans were good. Each side lived in peace with the other and there were many occasions when they would cooperate with each other. Over time, though, the Elzheni’s baser instincts prevailed. Their actions became more selfish and less honest, and, at times, even cruel.  Over the years, as the Elzheni showed themselves to be ever less reliable neighbors, the creatures of the sea became wary and prepared themselves against the possibility of betrayal by their former partners on Aldrem.

Relationships continued to deteriorate until, near the end of the Second Era here on Ethem, the Elzheni launched an assault against the creatures of the sea. However, these beings were prepared, and surprised the Elzheni attackers by their readied defense and their skills in war. The ancient texts have many tales of battle and hardship as this war continued for many years. We will not recount them here.

The war at last came to an end when the Elzheni used a special weapon they had been designed in particular against all things that lived in the waters. It was called an “Energy Bomb”. This repugnant device was an Energetic weapon designed to despoil the Spirit Energy that resided inside any living creature in the waters of the world, and it was designed such that it would not inflict damage on any creatures who lived on land. It is unclear from the ancient texts how this monstrous thing was created. However, that was done, the creatures of Aldrem’s seas had found out and they had found a way to reverse the nature of this weapon so that it would have an opposite effect. It would avoid the watery domains of the world and would only affect the Spirit Energy of living beings on land.

The bomb was deplyed on the western shores of the Tembra Continent during the middle of Tambra’s summer, buried deep in the sands abutting the ocean. Once it was detonated the effects were devastating and, for the Elzheni, wholly unexpected. Instead of making its way into the ocean waters, it created a dense cloud that slowly drifted across the lands of Tembra and into the skies above it. Once they had discovered that their device had been tampered with, the Elzheni were helpless to stop its deathly crawl across the continent. The bomb appeared to onlookers as a dark cloud of churning black and gray that crept across the lands at a steady, unrelenting pace. It took only a few days for the bomb’s cloud to make its way across all of Tembra, and then, through the air, it attacked all of the other land masses of Aldrem. Within weeks all life on the continents and islands had perished. Some of the Elzheni were able to escape before the catastrophe overtook them, but many more died before they could escape back to Ethem. One of the greatest victims of this immense tragedy was the death of the great city of Allem. This was the Elzheni’s largest and most populous city on the planet Aldrem, and contained works of great splendor and superlative construction. By the end of the Energetic Bomb’s devastation, this was nothing more than a ruin that stained the lands it had once occupied. It was a city that had become a tomb, and a place to which no Elzheni would ever return.

According to the ancient texts Fekxtah Station #2 was the most used of all such stations. Over centuries many Elzheni migrated to this lush planet, and so the station was in almost constant use during this time.

At a certain point the Elzheni migration increased significantly and it turned into something more similar to a military expedition. At this point the Fekxtah Station #2 was greatly expanded to accommodate more folk and larger objects.

This station was one of the great achievements of the Elzheni scientists and engineers. Tragically, the station was a victim of the great War of Sea and Land and the horrific weapon that brought it to an end.

The ancient texts tell of several attempts to re-open the station, but the results reported back seemed to be mired in some of the fatal politics of the final days of the Elzheni Race.