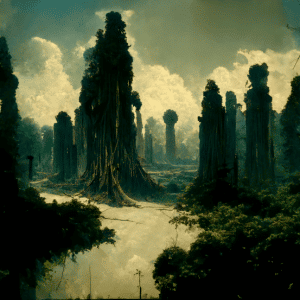 Harrayem is the third of the Three Sisters, the three planet Fekxtah that includes our own Ethem. This means that Harrayem is very similar to its two sisters, Ethem and Aldrem. As with its siblings, Harrayem has an abundance of living things living on it, and inside of it. There is a great variety of creatures and plantlife.

Without doubt, the most notable difference between Harrayem and its sibling Fekxtah is its plantlife. The plant life is not only abundant but it is immense compared with that of Ethem or Aldrem. The largest of these are the giant trees of Harrayem. It is common for these beings to be many hundreds of yards tall, and the ancient texts even tell of some that rise close to a mile in height. The land masses that cover almost the entire surface of Harrayem are populated by forests of these great plants, and the air high above the surface is frequently filled with large spores and floating flowers that emanate from them. These vessels are taken by the winds and it is not uncommon for them to make their way across the entire planet while never once touching the ground.

In addition to these giants, there are many smaller plants. There are long vines that spread themselves between the many trees or around their massive trunks. There are also bushes and smaller plants that live in the vast forest floor beneath the trees. These provide food and protection for the many creatures who live among the trees.

Though it is not the norm, there are some areas of land without forests. These are often covered by smaller plants. A good example is the Fellmin. These plants have large, broad and thick green leaves, and flowering stems that project themselves out of the thick leaves. The Fellmin grow to a height of anywhere between six and ten feet tall, and during the right season of Harrayem’s year they will spawn multi-colored floral blooms turning the green seas of plants into a cascade of color and texture.

Below the Fellmin is a world unto itself. The Fellmin grow closely together, and their leaves are forever battling each other, constantly contending for this light. The result is that every inch of space is taken by Fellmin leaves, leaving little or no light to fall below, and so, below the endless waves of green leaves and light brown stems, there is a world of perpetual darkness. This environment is perfect for the nocturnal burrowing creatures who live at the base of the Fellmin. They love this ecosystem, where they are well-hidden from predators, such as the many birds of Harrayem, and where there is an abundance of food such as worms and insects. The most abundant of the creatures that live below the Fellmin is a creature called the Caldook. They are quite similar to the shaloo that lives here on Ethem. However, whereas the shaloo are great tunnellers through solid rock, the Caldook can only burrow through the soil. They do not have the razor-sharp claws of the shaloo or their immensely strong forearms. The ancient texts tell of sturdy tunnels built by the Caldook that are hundreds of miles long criss-crossing large swaths of the planet.

We must also make mention of the insect life on Harrayem. They are found in every corner of the planet. They are a great source of food for Harrayem’s other living beings, and, like on Ethem, they help pollinate the many plants of their world. The ancient texts tell tales of great dangers posed to the Elzheni Travelers by these insects. For example, there are bee-like creatures that live throughout Harrayem. These swarms are highly territorial and will not hesitate to attack any who might stray into their space. As individuals, they are painful and bothersome; however, their attacks come as a concerted effort by hundreds or thousands at a time and can be very lethal to any they find.

Finally, we will mention the winged creatures of Harrayem. The ancient texts tell of only a few kinds or races; however, they are highly intelligent beings and they control the area of the world above the forests and plants. They are the intelligent sentient races of Harrayem equivalent to our own Ten Races, and they have formed great cities in the upper reaches of the trees and in the higher parts of Harrayem’s mountains. There are seven great “nations” of these sentient flyers and each has established kingdoms and nations that control various regions of the planet. There are seven of these races, and the ancient texts refer to them as the Seven Winged Nations of Harrayem. These are the creatures with whom the ancient Elzheni had to contend when they arrived, and the nations with whom they negotiated their presence on the planet.

The ancient texts about Harrayem have been damaged (or so we are told by the heolas mayam who care for these books — some scholars believe that the heola are deliberately keeping this information from us). Regardless of the truth of this matter, because of it we are missing crucial information about the Fekxtah Station situated on Harrayem.

The texts say that the station is located in a set of giant trees that form a forest ring somewhere on one of the plains of this Fekxtah planet. If so, it would mean that this station is quite different from the others. All other Fekxtah Stations are created from stone and iron and the hard substances of the world on which they are located, but the station on Harrayem would be located inside vegetation and presents an interesting conundrum for we scholars who study such matters.

The only other piece of information we have on this Fekxtah Station is an indication that near the end of the Second Era, and therefore near the end of the Elzheni’s time here on Ethem, there was a conflict between the Elzheni and the Seven Winged Nations of Harrayem. Some of the pages that describe this time period are only somewhat readable. A number of scholars have interpreted the text to say that the Elzheni succeeded in this conflict with the Seven Winged Nations and that they destroyed, or dominated, them. However, most scholars believe that the Elzheni were driven out of their places on Harrayem and eventually had to completely retreat from the world.

We will perhaps never know the full truth of this, provided of course, the ancient texts are not a fiction themselves.