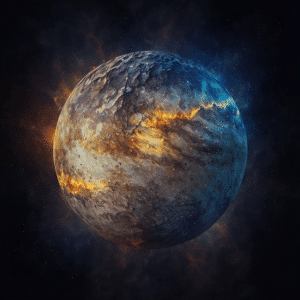 Kullarra is the second of the Fektah planets known as “The Twins”, and is the larger of the two. Like its twin this planet has a gravity that is greater than its size would dictate, though not as great as that of Ulgarra.

One of Kullarra’s most distinctive features is its extensive system of tunnels and caverns. The planet was described in the ancient texts as a “honeycomb of passageways” and “more akin to a sponge than a rocky planet.”

The massive system of passages weaves throughout the outer shell of Kullarra. The planet is slightly more than nine hundred miles in diameter and, according to the texts. The network of passages begins just under the surface and extends down as far as sixty miles into the planet. The rock of these passageways is hard and in some cases has been transformed into smooth metals. Some of these metals are a kind of substance that does not exist here on Ethem, and, if we are to believe the ancient texts, not found anywhere else in Oma’s Family. The Elzheni had great interest in these metals because of their extraordinarily powerful magnetic fields. There are also strange accounts of creatures that are by some definition alive even though they are made entirely out of these magnetic metals. Some of the reports talk about metal-monsters that stand on two, three, or four legs (sometimes a few more) and are eight to ten feet tall. The reports claim (unbelievably) that these creatures run across the surface of Kullarra looking for hot areas, usually those places with lava flows on the surface. When they find lava flows that meet their needs (there is no indication what those needs might be), they jump into the lava to be wholly consumed. The reports call these creatures Stalldaggers, and a few reports say they have seen some Stalldaggers that are hundreds of feet tall. These move much more slowly and look for the largest and deepest lava beds on the planet before they will jump in.

The outer crust of the planet has high rocky mountains covering the northern polar region. Some of these are as high as thirty miles. There are also several massive gashes in the outer crust. These deep cuts run for thousands of miles and are constantly bubbling with lava that rises up from the very core of the planet. Several passages of the ancient texts claim that these planet-wide gashes are frequently the targets for the large eruptions that periodically plague Kullarra’s twin, Ulgarra.

It is not entirely clear where this Fekxtah Station is located. The ancient texts mention three stations, and there are indications that there may have been more.

It is the considered opinion of current scholars that there is only one extant station, and it is possible that even that station no longer exists. There seems to be a history of stations being built, and later (sometimes much later) being destroyed. Several times the texts mention that the stations were destroyed by “Ulgarra’s wrath”, a strange phrase to come from such a scientifically-minded race as the Elzheni; however, the passage has been translated many times and there is overwhelming agreement that these words have been translated properly.

The most rational theory is that stations were in fact destroyed, but not by some mythical beast, but rather by the rationally understandable scientific principles that determine the behavior of these Fekxtah. The passages that describe Kullurra’s twin, Ulgarra, talk about its instability and the periodic eruptions that plague the Fekxtah. Our conclusion is that these volcanic eruptions are sometimes so powerful that they fling material out into space and that this material has, at times, impacted Kullarra with devastating effect. This would not only explain the repeated rebuilding of Fekxtah Stations on Kullarra, but would also help understand the honeycombed nature of Kullarra’s surface.

Whatever the cause may be, we are led to understand that another Fekxtah Station was built on Kullarra shortly before writing of the ancient texts ceased. This station was built deep under the surface of Kullarra to use its rocky surface to provide at least some protection. The station was built of material gathered from Kullarra itself and that material was used to created a structure inside existing tunnels below the surface. In addition, the station was built in a number of separate parts all connected through strengthened tunnels. It was thought that if there was another eruption that showered down upon Kullarra that at least some parts of the full station might survive. We will likely never know for certain.