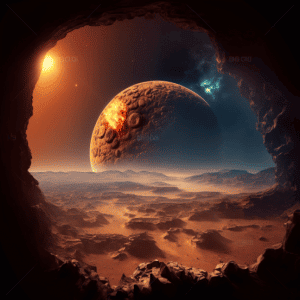 Ulgarra is one of the two Fektah planets in Oma’s family that are called “The Twins”. The other is the planet Kullarra, whose description follows.

These two Fekxtah are called “The Twins” not because they resemble each other in appearance. They are, in fact, very different in their composition and size. Rather they are called “The Twins” because they closely follow each other in their orbits around Oma. Why this is so was not completely understood by the great astronomical scientists of the Elzheni race; however, there is some description of them as somehow chasing each other. Current scholars believe that to be a purely figurative manner of speech. The attached image shows Ulgarra as seen from the surface of Kullarra, from the entrance of Kullarra’s Fekxtah Station.

Regardless of its relationship to its “twin”, Ulgarra is itself one of the strangest Fekxtah in Oma’s Family. It is a roughly round and, astronomically speaking, quite tiny planet, being slightly less than three-and-a-half miles in diameter. That, however, is not its most unique characteristic. Even though it is the smallest of Oma’s Family of planets, Ulgarra has a Gravity far in excess of its size. When standing on Ulgarra, your body will feel a pull toward the center of this Fekxtah that is almost twice that of our own Ethem!

An additional oddity is Ulgarra’s atmosphere. Most of the time it has no atmosphere at all, as one would expect of an object of this size. However, periodically, at seemingly random times, the planet will extrude a thick vapor from various fissures in its surface. Within a few hours this extrusion has settled onto every part of the surface of Ulgarra. At first it is misty and clear, but soon it becomes thick and heavy, and, in places, almost soup-like in consistency. It is evenly distributed across the surface of this tiny planet, extending from its surface up to six feet from the surface at which point it abruptly ends.

The composition of this temporary atmosphere is even stranger than its appearance. It is a fine mix of wet, sticky substances captured in a dense fog, and there is a tremendous abundance of life in this mixture. It is filled with millions of creatures that range in size from that of an insect one might find in the woods of Yildreth Forest to some that are so small they cannot be seen with the naked eye. Even though the density of the mist varies across this Fekxtah it is always dense enough that, when enclosed by it, one can only see a few feet ahead.

In addition, the mixture is not static. There are rivers of movement within it that pull on an unwary traveler, and there are documented instances of folk completely carried away by the strength of a sudden current. There are also the equivalent of lakes, oceans, and terrific storms in this atmosphere that arise from seemingly nothing, and nowhere, but appear in sudden bursts inside, and on top off, the mixture. It is notable that some of these large currents (rivers of mist) cross the entire planet, though, of course, that’s not saying a lot.

The very top of the atmosphere is different from what lies below. It is much thicker than the thick mist below it, forming a tough “skin” over the entire planet for as long as the mist remains, which can be many days or weeks. This layer is less than half an inch thick, but upon close examination it will be seen as a tangle of interwoven, stiff crusty cloud-like masses. This layer is called the nellosphere (for reasons unknown to us), and it is so thick that the mist creatures are able to walk on its surface. Above that there is nothing but the cold emptiness of space.

There is one additional, notable feature of Ulgarra that must be mentioned. This planet will, at times, show patches of fire and even volcanic eruptions. It is a world that, to all appearances, is nothing more than a dead rock, and yet, from time to time, it shows that below its surface there is some strange source of heat. It is a heat sufficient to break through the rocky surface of Ulgarra and melt it. The ancient texts tell us that rarely, very rarely, these eruptions are strong enough to fling material onto its close twin, Kullarra.

This station is a tall, featureless cylindrical structure that rises from the surface of Ulgarra along its equator. It has a single door at ground level, which has a strong seal to protect incursions from the atmosphere when it arises. Though the station, at its base, is only a few dozen yards in diameter, it rises to a height of almost 600 feet. From the top of the station one can easily see the curvature of this tiny Fekxtah.