Donnessling and Sheshoffiss arrived not long after dawn. They were tired and rushed. They told us to gather up our belongings and follow them. Most of us were awake; or, well, most of them were awake. I’d finally managed to fall asleep about an hour before they arrived, so I was a bit slower than others.

There was no time for breakfast. Allalling passed around some kind of tough biscuit. It tasted like stale dirt. I was about to say so when I saw the Nossring around me eating away and loving it. Clearly, an acquired taste.

We moved through the town, but hid ourselves as best we could, pulling our hoods over our heads as per instructions from Donnessling. I was used to walking without rest, so that wasn’t so bad. The really hard part was when we passed a bakery and a couple of carts with spicy meats and fish. My stomach complained when we didn’t stop. I promised myself that I’d go back and eat my fill (and then some) when this was all over.

We walked through the length of Berrimandry and found ourselves standing at the doors of an old three-story building that abutted a stone outcropping of the mountains that surrounded the northern half of the city. The building was boarded up and barely standing. It looked like no one had been in this place in decades, and the wooden double doors of its entrance were covered in old posters and nasty cobwebs. 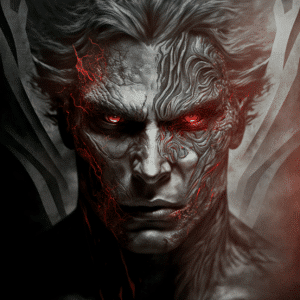 Sheshoffiss reached for the two doors, but before he could there was a deep clap like thunder coming from above us. It was a dreadful sound and we all reflexively ducked as if some great bird was about to dive into us.

We looked up and there stood a tall creature, slim and black, in dark leggings and jerkin that fit close to its body. On closer inspection I could see there was a dark red-gray hue to its skin. Its eyes had been closed, but when they opened they were like a blaze of fire. I couldn’t look, I’m embarrassed to say, and I had to look away. When I saw the Nossrings around me I could see a profound hatred in their eyes and, I think, a small amount of dread.

“A Red Nossring!” gasped Sheshoffiss. “But this cannot be. They were destroyed centuries ago!”

“We thought that as well, my friend,” replied Donnessling, “but we have suspected for some time now that we were wrong.” Then he turned his gaze to the creature above us, who was carefully inspecting our number. It raised its arms in some kind of threatening motion, and I saw that in addition to the two arms I expected to see at its side, it also had several more arm-like appendages rising up from behind it. Each arm ended in a bony black hand, and each hand held a vile looking weapon of strange design. The weapons looked very old, and very deadly.

I could see that Donnessling was about to call up to it, but before he could it spoke. It had a rasping, dark voice. It seemed unused to forming speech, or at least the kind of speech that folk like us could understand.

“Give me the Eyes that you carry!” It was directed at Donnessling and Sheshoffiss, and it was not a request. “If you do, I will promise to make your deaths quick and painless.”

Donnessling didn’t move a muscle. I couldn’t say the same for myself, but what this hideous thing just said got me pretty damn angry. I don’t like being told what to do. Or how to die.

Then Donnessling spoke. His words were even and displayed no hint of fear or hesitancy.

“Be away with you, old crow!” That got its attention, but not in a good way.

“You should fear me, you fool!” it threw back, and then it was Sheshoffiss’ turn.

I looked over at Sheshoffiss. He was concentrating fiercely, exerting all his might on the cloud wrapped around the thing above us. Finally, Sheshoffiss’ hand dropped and his face eased. The white cloud continued to swirl about the tall, thin creature and hold it in place.

As Sheshoffiss began to smile, we heard a soft crackling sound coming from above us. We could see dark cracks in the smooth outline of the cloud, and, slowly, the brilliant white dimmed and became a dirty gray.

There was a splitting sound as the remains of the cloud broke away. Instantly, Donnessling waved his arms wide and a thick, purple blanket of light appeared inches above us. At the same time the gray shards of Sheshoffliss’ cloud flew at us like a hard rain of icy knives. Most of the tiny blades broke against the purple covering or were stopped by it, lodging themselves in its thick skin. But some of them sliced through the barrier and struck against several of our number. Two nossring and three of the town folk fell to the ground, with grave gashes that were gushing enormous amounts of blood.

Sheshoffiss himself was struck in several places, but what hurt him more was the taunt thrown at him by the dark creature above, “You must conjure more than that, my dearest Sheshoffiss, if you wish to contend with those greater than yourself!”

Donnessling yelled to us, “Through the door,” and we broke open the door and ran into the dark innards of the ancient building.